Kim Kardashian Thinks She’s Turning Into A Cat Lady, Explains Why She Named Her Kitten After Kanye’s Song 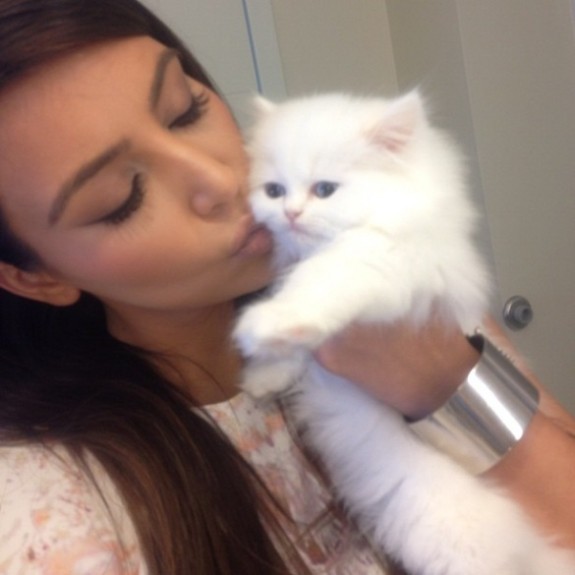 Kim Kardashian is turning into a crazy cat lady, at least that’s what she thinks. The reality star told People magazine that her obsession with posting pictures of her kitten, named Mercy, that Kanye West bought for her is becoming too much. The rapper purchased the persian white cat so that Kardashian wouldn’t feel so alone while she films her newest spinoff show, Kourtney and Kim Take Miami, while West continues to work on his next studio album.

Kim, who recently jetted back to Miami after having to travel back to LA for business meetings and pedicures, explained that she doesn’y want her fans to think she’s becoming a cat lady who is addicted to posting pictures of the cat. She says: “I just hope I’m not turning into one of those cat ladies that’s tweeting too many pictures of her pet!”

Kim continued: “I have always wanted a white Persian cat with light eyes. That was my thing. I’ve been always looking at kittens like that online. My mother actually helped me come up with that name. It’s a song of my boyfriend’s, so I thought it was cute. I just thought it was a cute name and it fit her.”

E! has already confirmed that the spinoff show will be shown in January, while all of the Kardashian sisters have said that this season is going to be the craziest one so far, which is kind of weird, considering that they have only started shooting two weeks ago. How much drama could they have started in such a short period of time?

Oh and Kim. Do you know what we wish? We wish you weren’t a cat lady – an invisible lady would be much better, besides it would benefit a lot of people. So, hopefully you can make that happen! Ha.