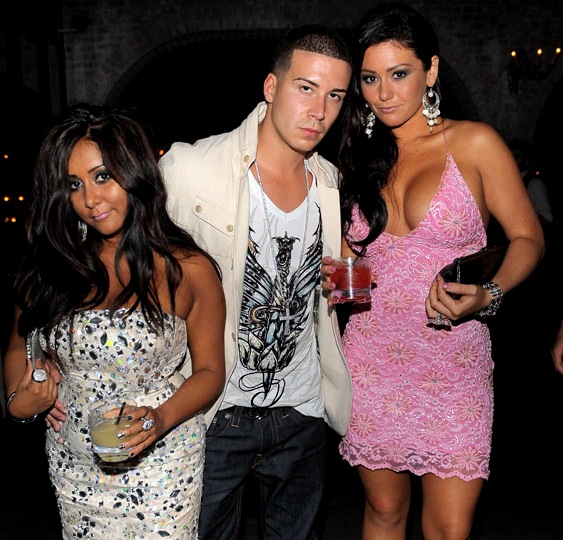 Jersey Shore’s Vinny Guadagnino has said that he believes there will be a fist-fight between Jenni ‘JWoww’ Farley and Roger Mathews on their wedding day. The couple who have been dating since season 2 (2010) revealed the news that they were engaged earlier this week, while Jenni Farley’s cast-members have since congratulated on her engagement.

When asked by Us Weekly if he would be attending the wedding, Vinny replied: “I have to. We’re like a family. I’m very excited. I’m glad that it finally solidified. Hopefully they go through with it.” He then joked that there will be a lot of drama towards the big event – and then when the wedding day is finally here, Jenni will go bridezilla crazy, saying: “She’s going to fist-fight Roger the day of the wedding!”

Meanwhile, JWoww expressed her feelings when she found out that Roger had proposed to her… whilst skydiving: “[After jumping] I look over and see a handwritten sign [saying], ‘Jenni, will you…’ and then I turned to him and freaked out,” she told InTouch. “The whole time I’m screaming, ‘What are you doing? What’s going on?’ He’s like, ‘I want to spend the rest of my life with you! Will you allow me to?'”

No date has been set, but wouldn’t it be great if Snooki and JWoww got married on the same day – this would definitely mean that MTV would bring their spinoff show back for another season. There would definitely be a lot of drama going down!