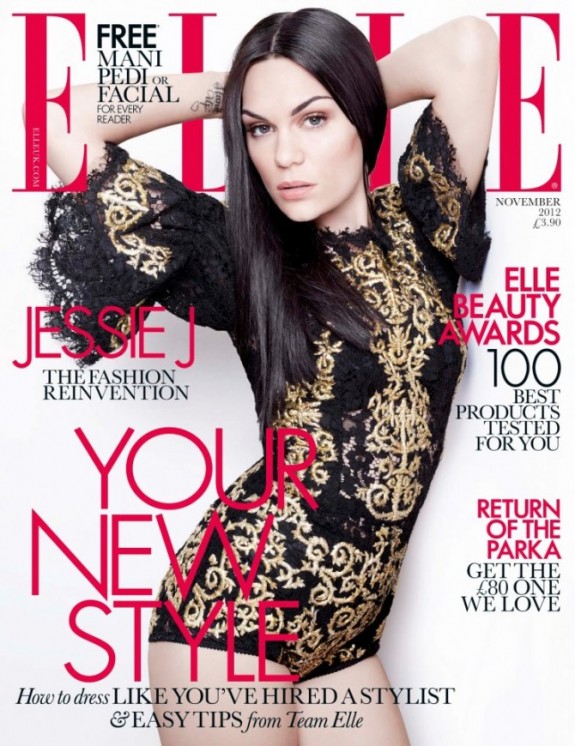 It’s been quite a year for Jessie J, who has only been in the limelight little over a year. The ‘Do It Like a Dude’ has achieved many things this year: she signed on to become a mentor on the UK’s version of The Voice, landed another two number one songs in the UK – while going platinum internationally with her debut album Who You Are, and now she’s covering Elle magazine UK.

Showing off her amazing figure in a Dolce & Gabbana outfit, the singer discusses her relationship with Adele – the two studied at the same school in London and would eat together at lunch – while she still can’t believe that she performed to an audience of over one billion at this year’s Olympics with special guests Tinie Tempah and Taio Cruz.

You can see why in the November issue of ELLE. Isn’t she beautiful? An alabaster vision of perfect facial symmetry and endless legs, she’s been styled up by Senior Fashion Editor Natalie Wansborough-Jones in show-stopping evening gowns and lashings of gold brocade.

From Dolce & Gabbana to Elie Saab via Jean Paul Gaultier and a vision of a Giles gown, she elegantly exemplifies why the garish old style has been left behind and a more graceful Jessie has taken her place.

Kate Mulloy interviews the Pricetag singer and discovers that she loves the odd lychee martini, that she plans to give Adele a sterilizer as a baby gift, and what she got up to after she sang to a billion people at the Olympics.