Looks Like Kim’s On House Arrest: Kanye West Enjoys A Day Out At Paris Fashion Week 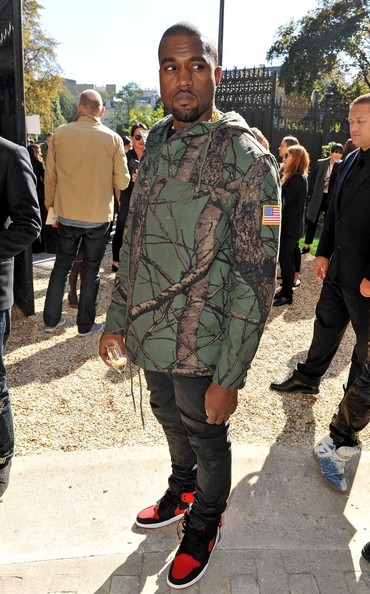 Controlling boyfriend Kanye West spent the day out by himself, and of course a few of his  beautiful women (models)  as they enjoyed watching a show at Paris Fashion Week. The rapper did not attend the event with his booty-ful girlfriend Kim Kardashian who he had put on house arrest,- either that or she was working very hard in Miami, being filmed by cameramen 24/7. Yup, we’ll go with number two. Ha.

Kanye looked a hot mess at the Celine 2013 Spring/ Summer fashion show, wearing his usual leather pants, a pair of sneakers and a hideous khaki-jungle styled jacket. We would have much preferred West to be wearing a black suit to the event – it would have made him look more like he actually cared to go to one of his friend’s clothing collection. Hmm – she just doesn’t care, does he?

Note that Kanye has been styling Kim for the last few months and the choices he has made for her haven’t exactly been what we would call “average”. It’s below that, but we can’t think of the word. Ahh, yes –  a hot mess. Meanwhile, Kimmy K is living it up in Miami as she and her sister Kourtney Kardashian film their new show Kim and Kourtney Take Miami while Khloe flew in yesterday afternoon to show the two.