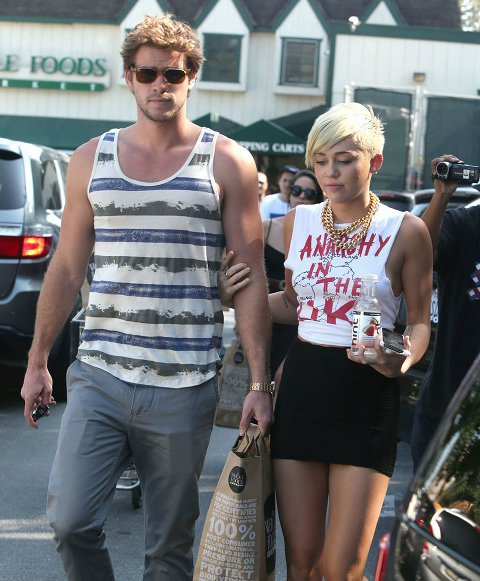 Twitter is an incredible thing–it has provided celebrities an equivalent to drunk texting, with the entire world. Miley Cyrus has been in a lot of trouble recently; she’s been sending out mysterious tweets about love and personal fulfillment, and it has got the gossip lovers wondering, is there trouble in paradise? The young singer recently got engaged to Australian hunk Liam Hemsworth, who had a starring role in The Hunger Games. For the past month, Miley has been tweeting a lot about love, and it isn’t very flattering to Liam! On September 13th, Miley tweeted,

“ever feel like you want just…. something more. not sure what exactly… passion perhaps?”
then,
“sometimes i feel like i love everyone more than they love me. hatttte that feeling,”
followed by,
“Thought of the day: maybe it’s not that they love you less, they just love you the most they are capable of loving.”

We know Miley is dealing with a lot–her trashy family includes dad Billy Ray Cyrus, who told reporters that Disney completely ruined Miley, a half brother who knocked up fellow Disney alumni Brenda Strong, and a baby sister desperate to become the next, well, Miley. After rumor started buzzing, a friend told reporters, “She’s just talking and writing and expressing herself just like she did when she cut her hair. Not everything means her relationship with Liam is on the brink of disaster. They are totally fine and couldn’t be better.” But another source reported that Liam wants Miley to keep her private life private, and is demanding she shut down her Twitter, since it is obviously a dangerous outlet! No man would want his girl tweeting about his inadequacies!
Another source responded to these rumors of Liam’s control-freakiness, explaining, “There are so many bulls**t reports out there but I can tell you for certain Miley and Liam are perfect. [Their] wedding is still on but it’s not like they have to rush off and get married like yesterday. They’re busy working. There’s so nothing wrong with their relationship and it’s so sad people who don’t know them say they are.” Well, I’m sorry, but Miley has been dead quiet ever since those “I’m all alone in the world and nobody loves me” tweets last month. It’s possible she’s been busy, maybe lost her phone, got a thumb disease that makes typing hard–whatever. But I think that Liam really is mad, and that Miley is trying to be a good future wife by staying off line.
What do you think? Who wears the pants in their relationship? Is Miley wrong to tweet things like that? Or (gasp) are they maybe too young to be so serious? Tell us what you think in the comments!
Continue Reading