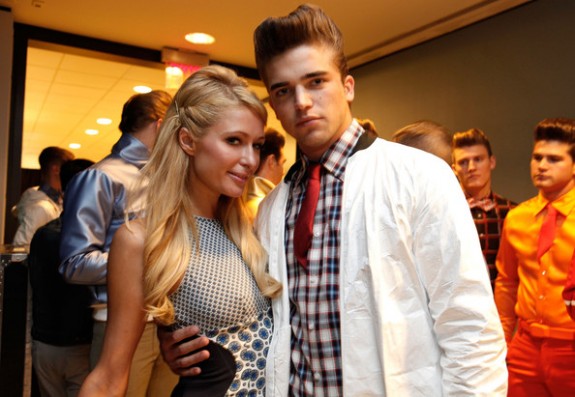 While many boys would love to catch their girlfriend kiss another girl, River Viiperi is totally against it. The famous model who is currently dating Paris Hilton lost his temper last night at XS nightclub at the Encore Hotel in Las Vegas when Paris made out with an unknown woman, while their boyfriends watched. According to TMZ, the 21-year old got so angry that he punched the woman’s boyfriend in the face so hard, he needed to be taken to the hospital.

The incident took place early this morning at around 2:30 AM, and while the victim was so angry that he said he’d file charges against the model’s actions, Viiperi didn’t say a word and didn’t make a runner when the police were on their way – he stayed in the club with Paris who made a quick exit shortly after, leaving River by himself – she didn’t want to be seen in another drama sitch.

Upon the cops’ arrival, he was arrested and charged for misdemeanour battery but was released without ever going to the police station,  while Paris was not accused of doing anything wrong – unless you think kissing a girl is a crime – and was therefore not questioned nor will be questioned by police.

Can Paris ever catch a break from bad media attention?! She’s probably ditched the kid for good. She should know that dating younger men has its disadvantage and this is one of them. Ha.