Kristen Stewart Is Being Naughty And STILL Texting Rupert Sanders! 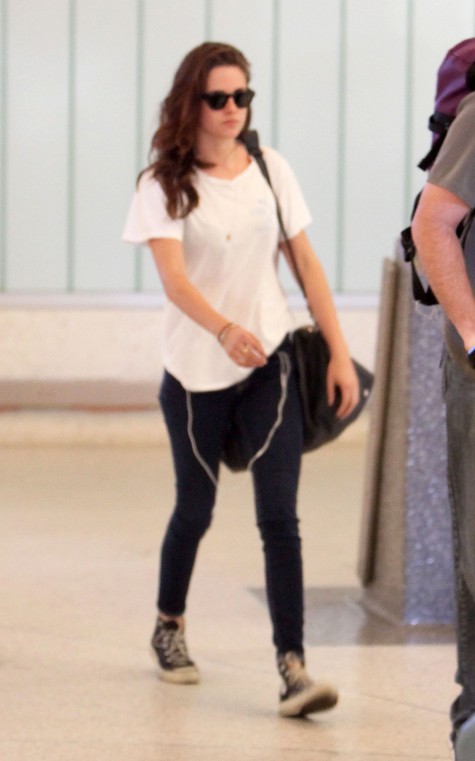 It looks like Kristen Stewart really doesn’t want Rob Pattinson back THAT badly!  After all of the public shaming and groveling for another chance, the trampire was granted another opportunity to crush Rob’s heart last month. The two were rumored to be working on reconciliation after a few months apart and at one point last week a Uhaul truck appeared at Rob’s house fueling speculation that Kristen had moved back in. According to OK Magazine Kristen is going about fixing things by adding more lies to the pile. Rob demanded she cut ties with Rupert Sanders and Kristen can’t just seem to do it,

“Rob has agreed to give it another go. He’s still very cautious, and he and Kristen have signed on for couple’s therapy. They’re both really hoping that this will all end with happily ever after. Kristen is saying all the right things to Rob, but she’s not being totally honest with him,” says the insider. “Rob made her promise to stop talking to Rupert, and she’s broken that promise already.” Regarding the fact that she still texts Rupert, the insider dishes, “Kristen justifies it because, technically, she’s not actually talking to him, so she feels like she’s still keeping her word.”

Does this really come as a surprise to anyone? I mean, do you think it would even shock Rob? She was so smitten with Rupert that she took the affection outdoors in broad daylight in spite of knowing the risk they were both taking. She obviously is compulsive when it comes to him and texting would be a quick fix! How do you think rRob will react when he realizes that the skank is keeping more secrets? Will he kick her and her scowl to the curb for good?  Are you hoping to see a permanent end to this ill-fated couple? Tell us your thoughts in the comments below!