One Direction’s Liam Payne Says He Worries About Zayn Malik, Radio DJ Cuts Singer Off Due To Banned Questions 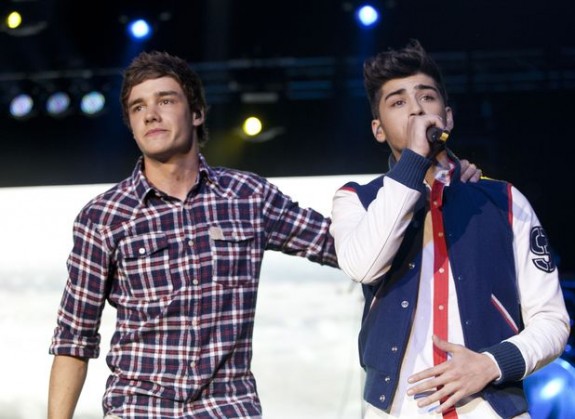 Zayn Malik is struggling to cope with the fame and money – well maybe not with the money, but definitely the attention. Ha. The One Direction member has said to be frightened to use social-networks when people would call him a terrorist and other hateful comments that would make him so upset. Not only that, he decided to remove his Twitter account last month, before re-activating it just one week later, saying his fans are the only reason that he was back on the site.

Now, Liam Payne has said that he worries for Zayn, because the two have become very close over the two years – Liam considers Zayn his best friend and would always look out for him since he hasn’t quite managed to deal with the pressure of fame just yet: “The only person I really worry about is Zayn, because I don’t think he’s quite accustomed to all of this. He’s had a terrible time on Twitter,” the 19-year-old singer said.

The group have made over $100 million over the year through incredible sales of their debut album Up All Night. “I don’t think he’s quite adjusted to it yet, I’m sure he’ll get it. He’s my best mate. I’ve got to look out for him,” Liam continued before adding: “It’s mad to think I didn’t know them two years ago and now they’re my best mates.”

Meanwhile, during a recent radio interview, Zayn’s team had banned so many questions that the host didn’t even know what to ask the singer for his show ‘Rush from The Morning Hot Tub’. The following listed things were banned to be talked about:

1. What is your celebrity crush
2. Which of you have girlfriends
3. Who came up with the name One Direction
4. Anything X-Factor related
5. Worst habits about each other
6. Do you guys fight
7. Best prank someone played on you
8. Describe each other on one word
9. Funniest fan stories
10. If not in the band, what will you be doing
11. Pre-show rituals
12. Anything about money or religion

So, what did the radio DJ do? He said this: “Hi Zayn you’re a very busy guy. I want to talk to you but I can’t do that…no X Factor, no pranks….well that’s about going to do it. Thanks for taking the time to talk to us and continued success for the future.”