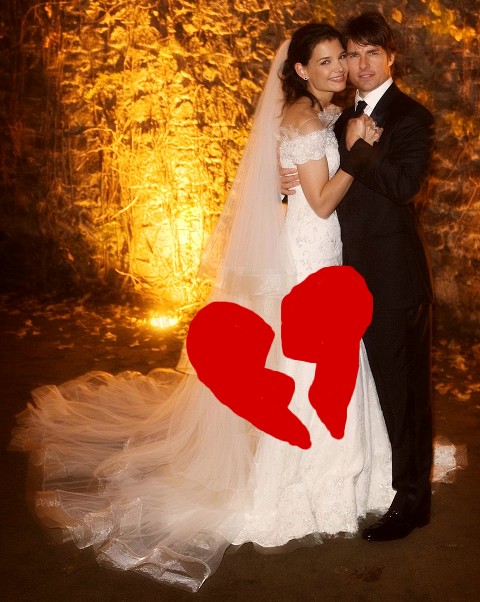 In the not-so-unexpected saga of another Tom Cruise romance that bit the dust, newly released court papers show that Katie Holmes was preparing for six months to divorce Tom. The National Enquirer reports court papers show that “the ‘marital relationship’ had ‘broken down irretrievably for a period of at least six months immediately preceding.'” Katie shocked us all by filing for divorce from Tom in August, and it was neatly wrapped up in a few short weeks. Since the split, Tom has been seen on Scientology speed dating dinners, skipping Suri’s first day of school in New York, and has been facing rumors about the weird coincidence that all of his marriages ended when his wife was 33. Not to sound like a conspiracy theorist, but there is definitely more to this story than their reps will say!

Also strange, although the pair had a huge wedding in Italy, their official papers show they were officially married in Los Angeles in November of 2006. Katie has been silent since the split, but it’s no secret that Tom’s church leaders made it clear she wasn’t welcome. The couple also fought about the fate of six-year-old daughter Suri. Tom wanted to send her to a Scientology-led boarding school, while Katie felt that being around family and living at home was best. The mother-daughter duo is currently living in New York City, where Suri attends a private elementary school.

Most news worthy is the specifics of the child support Tom was ordered to pay. Papers show that the 400,000$ that Tom pays annually are meant to cover “medical, dental, insurance, reimbursed medical and dental, education, college, extracurricular, and camp expenses.” Spare change for a guy who has a quarter of a billion dollars in the bank, but all of those zeros are pretty appealing to people who have real expenses (like college, ahem). The papers also show that Tom faces up to six months in prison if he ever misses a payment, but I’m sure he has people who deal with petty things like his money and his children–right? The full story is available in the current issue of National Enquirer.