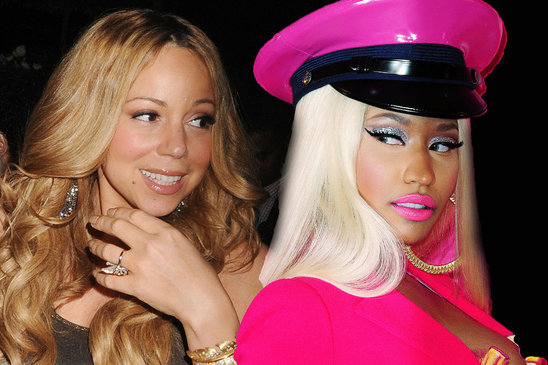 Nicki Minaj brought the ghetto side of her to the table yesterday afternoon as the taping for American Idol continued. The four judges were in Charlotte, North Carolina, when a contestant had come out to perform their song. Upon completing the song, the judges all had mixed thoughts on the unknown contestant’s singing abilities and Mariah Carey would constantly interrupt Nicki as she voiced her opinion – when she suddenly snapped.

Minaj allegedly turned to Mariah, telling her that she would beat her up before adding that she had told producers she would not be dealing with this kind of nonsense (note, we are trying to say what she said in a nice way). The singer continued that she would not put up with Carey’s highness, while continuously patronizing her during the audition stages, while Carey stayed calm but also retaliated.

Check out what the two had to say to each other. (TMZ adds that Nicki supposedly told Mariah she would beat her up before the video had started).

Nicki  Get this s**t in self control.  Get in control.  Get in control.
Randy  Settle down, settle down.
Nicki  Don’t lose your head.  Don’t lose your head (inaudible).  Don’t tell me I’m a gangster.
Nicki  (inaudible) every 5 minutes.  So every time you patronize me, I’m-ma take it back, and if you’ve got a f**king problem, handle it.
Nicki  I told them I’m not f**kin’ putting up with her f**king highness over there.  Figure it the f**k out.  Figure it out.
Mariah Oh why, WHYYYY .do I have a three year old sitting around me?
Nicki  I’m not gonna sit here every f**king minute to have you come down and harass me every minute everyday.
Mariah I can’t see my kids, because you decided to act like a little crazy bitch and go all around the stage.

Check the video below to see it all go down.