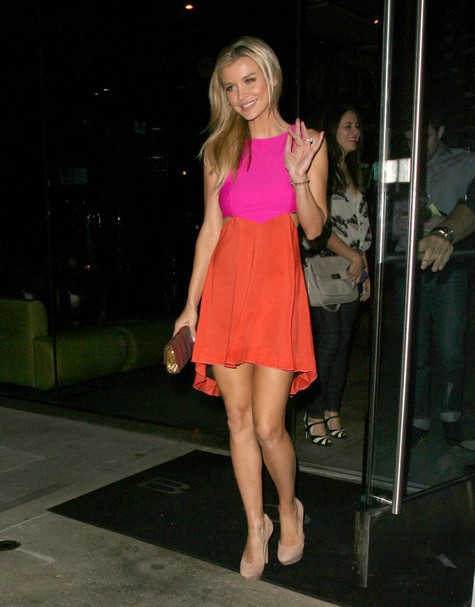 If you’ve tuned in to The Real Housewive’s of Miami than you already know who Joanna Krupa is. A high maintenance model that thinks she’s above everyone else, a rotten sister that treats her family like garbage and to put it simply, Joanna is an overall head spinning bitch. This week some serious allegations have popped up regarding the diva and they include talk of her being a high paid escort to fill in those gaps between modeling gigs.

Joanna’s attorney, Marty Singer fired off a nasty letter to Nik Richie at TheDirty.com for claiming that anyone can bang Joanna for a mere 10 grand. Richie is standing by his source and absolutely refusing to change a word of his story about Joanna, in spite of being threatened with a lawsuit if he doesn’t pull the piece.

Could Joanna really be banging millionaires? Let’s review what we do know for sure. She is as money hungry as they come and looking the part of a rich girl really is everything to this chick. She is cut throat and definitely has a hard time making and staying friends with women. In other words, she’d have no problem screwing your guy if the motivation was right. She’s not loyal to her family which usually means she’s not loyal, period. Then there’s her lousy relationship with Romain Zago. They have been engaged for five years and when she decided to finally push for a wedding he could have cared less. Their sex life also sucks. How do I know?  Because she told everyone on camera that Romaine never wants sex and doesn’t satisfy her! Pretty harsh words to say about your supposed longterm love, don’t you think?

Roll all of these things that we do know together and is it a recipe for a high paid hooker? I’m thinking is really could be!  Tell us your thoughts on Joanna in the comments below!