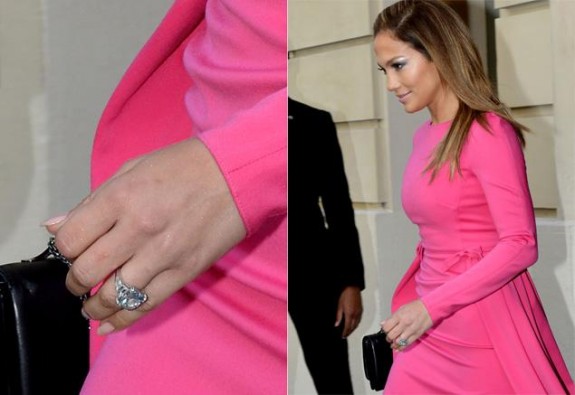 Ha. To have an insider from Jennifer Lopez‘s team make you look this small is just crazily funny, right? Earlier this week, while out in Paris, France with her children and Casper Smart, J-Lo was spotted wearing what looked to be an engagement ring on her finger which had everyone thinking that Smart had made the move to get Jennifer walking down the aisle again.

However, according to a close source to Jennifer, the ring on her finger was just a little accessory to the Paris Fashion Week show she was attending on that day – nothing more. Besides, Casper couldn’t have afforded the ring that was on Lopez’s finger anyway, it’s way out of his savings balance, or yet, it’s so expensive, it would probably take him a year to pay for it with Jennifer’s 10k monthly allowance.

The insider revealed it was nothing more than a “pretty ring” she had decided to wear for the event, before adding: “He can’t afford that ring. This ring could just be for their anniversary.”

Lopez definitely doesn’t have time to plan a wedding as she will be going back on tour, while she is working on several new movies — in other words, her hands are full: “She’s in the middle of her tour and her manager doesn’t want her distracted,” the insider said. “He wants her to focus, and an engagement would distract her too much.”