Back to Blonde: Rihanna Promotes New Fragrance ‘Nude’ In Lingerie 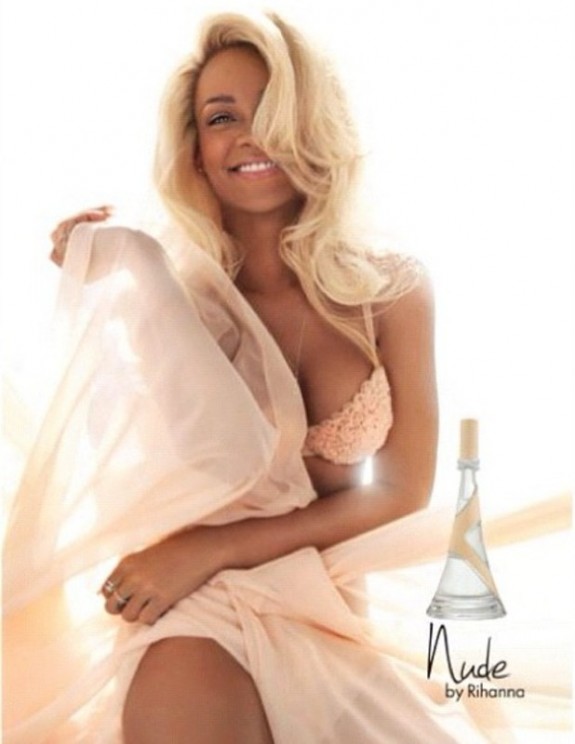 Rihanna is launching yet another fragrance, titled Nude. The singer tweeted the picture of the promotional photo for the perfume where she’s showing off a blonder side to her, while wearing light-colored lingerie — and the smile on her face says it all: Chris Brown must have spent the night before the photo shoot happened, so you know what that means. Ha.

Though she’s releasing a new record next month, while already having dropped a single, named Diamonds, Rihanna is not looking to slow down anytime soon, with her world tour starting in March and potential movie roles. Oh – if you are wondering why Ri’s already brining out a new fragrance despite just having brought one out, around two years ago. Well, there’s really no other way to put it… they sell extremely well.

The singer released Rebelle back in February, and though it may have only been on sale for 8 months, it is most likely to have already sold 10 million bottles, considering that she’s already shifted 4 million in the UK alone. Speaking of the fragrance at the time, she says: ‘My new fragrance is about taking control but still being a lady. There’s a feminine, romantic element to the fragrance – but there’s also a defiant quality in it. I love its duality.’

While promoting her new product, the singer tweeted yesterday: “Here is my new add for a brand new fragrance #NUDE !!!” she tweeted. “Make sure you smell sexy, especially naked, this fall.” When a fan asked Rihanna what the perfume would smell like, she responded, saying: “ME!!!”

Are you buying Ri’s fragrance?!