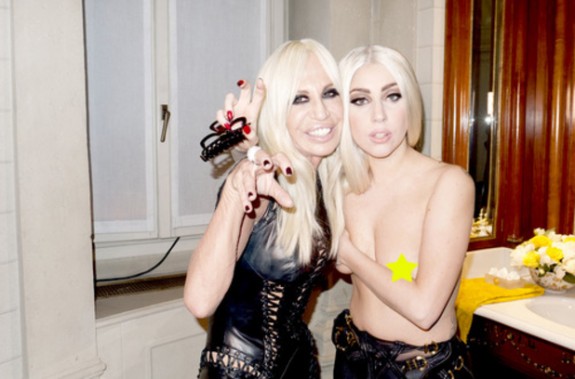 Check these two out. Ha. These two could be mother and daughter – both nuts, crazy, weird, yet very talented. Donatella Versace and Lady Gaga were happy to pose for some pictures in Versace’s late brother’s home Giovanni Versace in Milan where Fashion Week had also been held at. While some pictures were very friendly to look at, as the two drank tea and played Donatella’s dogs, others were more explicit.

Gaga definitely had our attention when she posed topless while placing her right arm over Versace who seems to have become a little monster, considering that she put her paws up — which the singer’s fans do as a symbol of being a little monster. Ridiculous, yet funny – especially when Donatella does it, seeing that she’s fifty-seven years old.

Though many say that Donatella has gone too far with her plastic surgery, we think she looks great. There’s just something about her that has us thinking not only does she look okay for her age, but she must be a really fun person to hang around with. Imagine all the nice designer clothes she would send you for free of charge just because you are her friend. Heaven! Ha.

Check out more pics of the two in Milan, below.