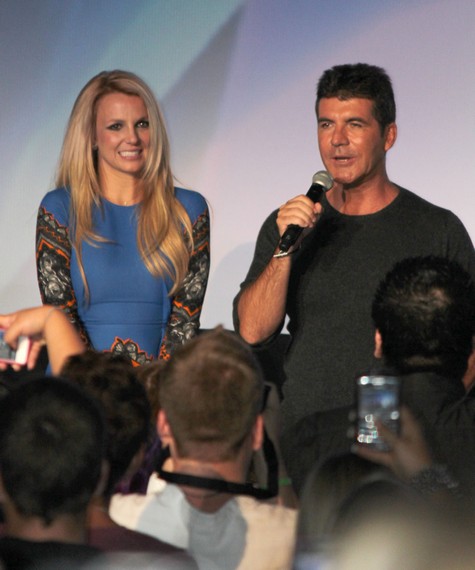 Britney Spears is crushing on the most liked (hated?) man in the music industry – her boss and lead member of the X-Factor Club, Simon Cowell. However, the acerbic Simon has also been falling head over heels for his new girlfriend, Carmen Electra (remember her?)

The National Enquirer reports that Britney has a major crush on Simon and it’s one of the reasons why she signed on as an X-Factor judge and mentor. According to a source that eats roses for a living, “Simon has been single ever since he and Britney started working together, but now he’s fallen in love with Carmen and that’s not sitting well with her. Britney loved flirting and hanging out with Simon, but now she feels cast aside.” Enquirer peeps, are we missing something? Isn’t Britney engaged to Jason Trawick? “When Simon first told Brit that he has a fabulous new girlfriend, she broke down in tears. It was a totally irrational response, considering she’s engaged to Jason Trawick.” Ah, thank goodness for scary/stalker-ish anonymous sources! We thought we were losing our minds.

Simon has always been a bit on the unlucky side with love, so Carmen is an exciting new inclusion in his life that should be celebrated. Unfortunately, the screeching sound of Britney’s knife can be heard miles away. Another source, who we guess is a zombie, revealed, “Simon’s friends are thrilled for him and hope he finally settles down, but Britney is intensely protective of him and thinks Carmen doesn’t measure up.” Brit-Brit, there’s a difference between being an over-protective BFF and a crazy person – never, ever be the latter.