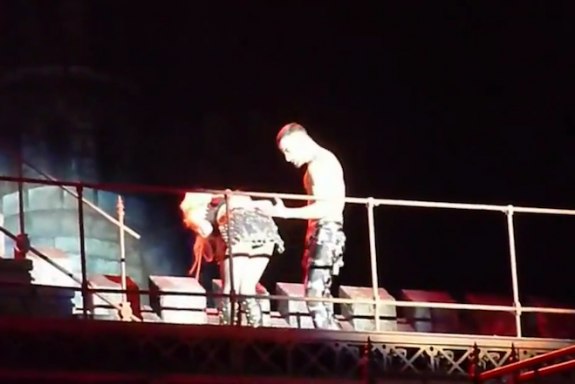 Lady Gaga vomited everything inside of her when she performed ‘Edge of Glory’ in Barcelona for her ‘Born This Way Ball’ world tour. The singer has followed in Justin Bieber’s footsteps as she made her way down the stairs in a choreographed dance, while her backup dancer was already waiting for her to come down — but suddenly the singer couldn’t hold back when she hid behind the dance to throw up.

Though we can assume that she may be under a lot of stress with the amount of work she had been doing, others have a fair point of saying she could be making herself sick, considering that she’s lost a tremendous amount of weight since last month, when tabloid magazines had called the singer a fat sl*t for seeking attention by gaining weight.

At a later show, following the critics’ comments, the singer had told her fans they should celebrate about her being called a fat pig because those comments would never get to her, whilst singing ‘Hair’ of her album Born This Way. Though we can not be 100% sure, vomiting that much is pretty damn scary — ugh, if your eyes can’t handle someone puking, don’t watch!