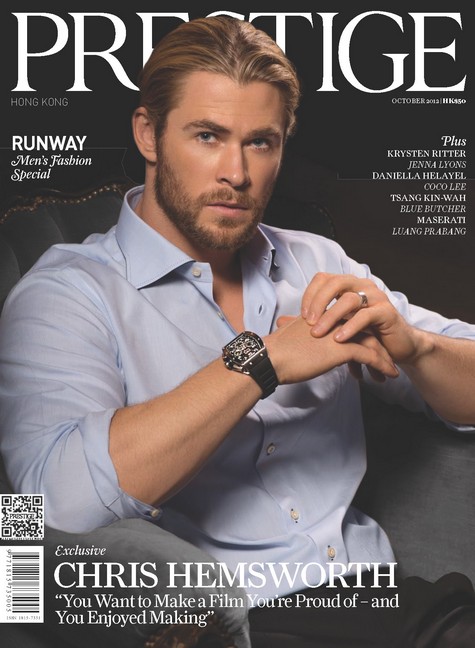 Chris Hemsworth showed up at a dilapidated London townhouse for an exclusive cover photo shoot and interview for Prestige Hong Kong’s October 2012 issue, the Australian movie star proved refreshingly easygoing and down to earth.

The second of three actor siblings to pose for the magazine (the youngest, Liam, appeared on the May 2012 cover), Hemsworth is riding a wave of success that broke with parts in 2009’s Star Trek and A Perfect Getaway, and Ca$h the following year. If that weren’t enough to turn his life around, the 29-year-old Melburnian now finds himself an adoring husband and father, roles he’s assumed with grace and aplomb.

As for his career in front of the camera, Hemsworth is clearly eager to spread his wings professionally. He recently wrapped the biopic Rush, which recounts the epic struggle between Niki Lauda and James Hunt (Hemsworth) for the 1976 Formula 1 World Championship, an experience he obviously revelled in. “I fell in love with the character…” he told Prestige. “[Hunt] was incredibly charismatic…I really enjoyed playing that part, and finding out about him was fascinating.”

On Working with “Game of Thrones” director Alan Taylor on Thor 2:Awesome. Yeah, I love the way he adds an incredibly organic element to the fantastical world of Thrones, and I think that’s what Thor could benefit from. It’s grounded in reality, no matter how mythical or science-fiction-like it becomes. There’s a truth to it all. Certainly, working with him now, you can see he doesn’t want Thor or the Asgardians to seem like some distant race or god-like. He still wants them to be relatable.

On why he doesn’t do Twitter: “I think there’s a danger of being overexposed with that stuff. The mystery of who you are is what keeps people interested in wanting to see you on the screen. Also, it’s easier for them to believe you as that character if they don’t know too much about you. It’s hard not to be overexposed these days with the Internet, and especially when you do a tour for something like The Avengers or Snow White, where you’re contracted to do an incredible amount of press. Besides, I’d rather be hanging out with my family than updating to people I don’t know about what I had for lunch. Also, there are so many fake ones out there, which is pretty frustrating.”

For more on the interview visit Prestige Magazine