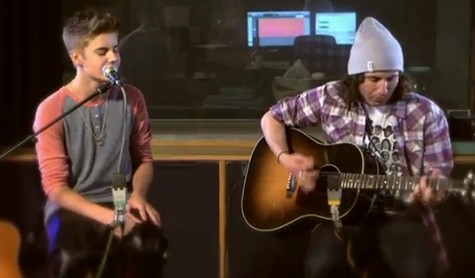 There’s a new Justin Bieber video and it’s not about him hitting the paps! Nuh-uh! The new video, of our most discussed member, of society is unlike anything you’ve ever witnessed. Ladies and gentleman, for the first time in Bieber’s short history on this planet, he finally sounds like a professional singer. The video, recently released on GossipGirl.com, shows a stripped down and acoustic Bieber singing “As Long As You Love Me” – one of his most recent hits. The performance was for the BBC 1 Radio Teen Awards in the UK and the video is already going viral as we’re writing this. Creepy lip-licking fans and ridiculous lyrics aside, Justin’s performance was adult, professional and unorthodox for the first time in this little one’s spectacular career.

The semi-self indulgent Bieber finally removed the auto-tune, pyrotechnics and lip-smacking dance routines to give a subdued and gentile performance. His upper register, which was slightly thin, allowed him to switch over into pitch-perfect falsettos and controlled delivery of the fast-paced lyrics. It seems that our sentiment towards Bieber might slowly be edging over to, “Dude, he isn’t so bad, hey?”

The mega superstar wore a v-neck shirt with PVC pants and red pumped-up kicks. However, the super popular singer not only looked like a superstar for the first time, but he also finally proved he is not the bubble-pop-candy-floss singer that we despised some years ago. He interspersed his vocal styling with short rap-esque snippets, quickly fell back into the repetitive song and built to a strong and cheeky finale. Hey, hand it to the dude – he was definitely more courageous than many of these so-called “pop stars”. Most of them wouldn’t even dare to touch an acoustic performance, because their voices would never be able to handle the accentuated attention to detail. Justin Bieber might finally be growing up!

Check out the video below and let us know in the comments whether you think the Biebs did a good job.