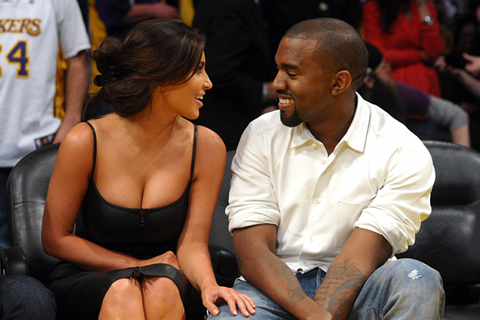 This cannot be coincidence! Yesterday we found out that Kim Kardashian‘s ex (and reported love of her life) Reggie Bush knocked up his girlfriend Lilit Avagyan. Lilit looks a lot like Kim, and is also Armenian, so just file away how weird that is! I speculated that Kim would respond the same way Jennifer Aniston does with Angelina Jolie. Basically, she would be desperate to catch up to them! I was right. Kim and boyfriend Kanye West were spotted house hunting in Miami yesterday. She’s is in town to film Kourtney And Kim Take Miami. Kim was rocking a pair of shades that Kanye bought her in Paris, and Kanye was being a gentleman, holding an umbrella for Kim as she navigated the pavement in 4-inch stilettos.

You can check out the pictures–just try not to gag when you see the one of Kim groping Kanye’s ass. The original report says they were in a very expensive neighborhood, so what does this mean for their future? Are Kim and Kanye going to become Mr. and Mrs. Kimye? We know that Kanye has gotten a thumbs up from mom, Kris Jenner, and sisters Kourtney Kardashian and Khloe Odom. I think Kanye is super creepy–what with the cleaning out of her closet and filling it with Kanye approved clothing. He is super possessive. I don’t want to jinx anything, but the obsessive thing normally ends with someone dead in a trunk! Let’s hope the worst that happens is matching tattoos, but it can’t be healthy to be in such a controlling relationship.

So what does this mean? Blake Lively and Ryan Reynolds bought a house and then BAM, married in secret. Of course, a secret wedding isn’t really Kim’s style. I’m thinking that if Kanye ever popped the question we’d get an entire new cable TV channel that had 24/7 coverage. The life of Kim’s live in make up artist, watch someone grow the flowers to use as centerpieces–and so on. Kim is a fame whore, first and foremost. But I think she really does love Kanye. She has said that her biggest turn offs are “anything to do with bad hygiene, like teeth or nails or big ears. I’m really weird about stuff like that.” And Kane has white teeth and tiny ears. You know their love is true!