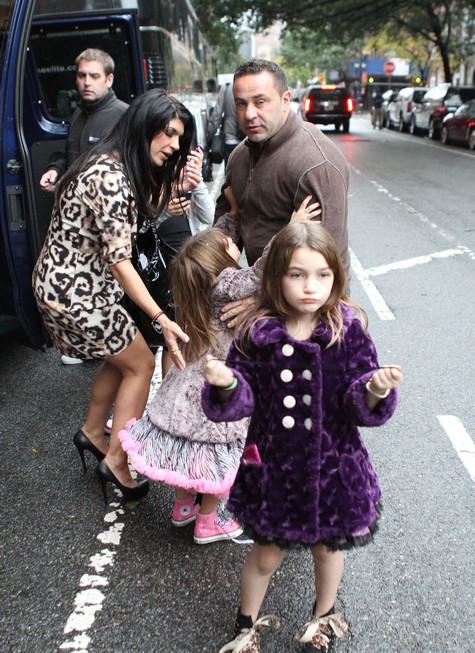 I can tell you first-hand, raising an 11 year old is not an easy task and Teresa Giudice’s daughter, Gia, is even tougher than the norm.  She has been featured alongside her mother on The Real Housewives’ of New Jersey quite a bit and Gia is a real chip off the ole’ block. She is rude and disrespectful to absolutely everyone. She also has a huge entitlement thing where she expects to get whatever she wants, when she demands it. The tantrums would lead her to be grounded for months at a time if she was part of a normal family.

The situation has become so bad that even school staff has reached out to Teresa, informing her that her daughter is being severely affected by her quest for fame. Teresa, proving that she could care less scoffed at the idea of stepping away from the limelight for the sake of her kids. According to Radar Online

“Teresa doesn’t care about anything but the fame,” the source said. “The show has been greatly affecting her daughter Gia at school. She’s being teased by the other kids and Teresa even had to go to the school to meet with teachers about it.  “If your daughter’s happiness and safety isn’t enough reason to get off the show, then I don’t know what is,” the source said.

If you look back to earlier seasons of RHONJ Teresa was a completely different person and a different kind of mother. The need to continue those fifteen minutes is obviously running her life and it’s costing her absolutely everything. The rest of the ladies have cut ties with her. Joe Giudice is likely heading to jail for fraud and if Gia’s daddy ends up in the slammer she’s going to really need her mother. Do you think Teresa will see the light and get her priorities straight for poor Gia and her 3 younger daughters? Tell us in the comments below!