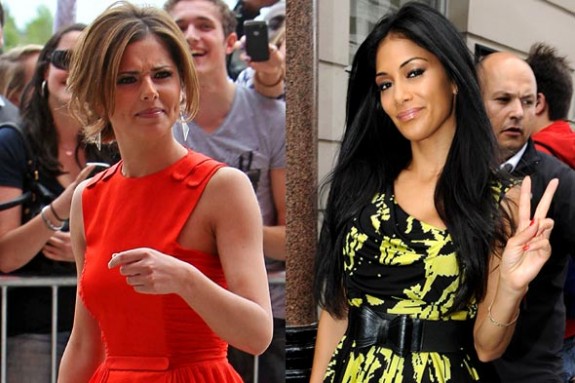 Cheryl Cole is releasing her autobiography tomorrow and some of it has already hit the internet — in other words, it has leaked. Though we had expected for the former X Factor US judge to talk bad about Simon Cowell for dropping her on the talent show, surprisingly Cole has also featured Nicole Scherzinger – the woman who replaced her as a judge on X Factor – in her book, where she says she found Nicole very strange and and crazy when she would suddenly sing Cheryl’s songs and act like an obsessed fan.

Cheryl reveals in a leaked extract that when the two first met on X Factor UK, two years ago, Nicole came up to Cole and bursted out to sing ‘Promise This’ which was one of her latest songs. She explained: The first time I met Nicole was when she was performing on The X Factor in London. Oh my God, Cheryl! You’re just as pretty in real life! I heard your song on the radio!’ she had gushed. It was really embarrassing.

She added that she felt the situation was very awkward when the former Pussycat Dolls starlet would sing the full song in front of her: “Then she started singing ‘Promise This’ to me, and I swear to God the woman sang the whole song, to my face. It was just so awkward, and every time I stood next to her she started singing it again.

“I thought how that would be like me going up to Britney and singing the whole of ‘Baby, One More Time’ in her face. Can you imagine how weird that would be? … [On X Factor USA] Nicole was singing and dancing to her own songs, and I found that a bit crazy and odd,” she said.

Cheryl – My Story is out tomorrow in the UK.