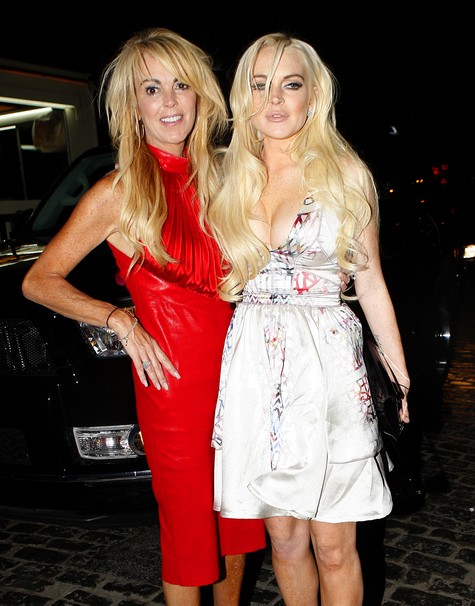 Lindsay Lohan strikes again- quite literally. The consistently troubled star found herself in a violent fight with her mother, Dina Lohan early this morning. The hard=partying, mother-daughter duo hit up one of NYC’s hot spots last night and didn’t stumble out the door until 4am. According to TMZ the two were heading back to Dina’s Long Island home when a fight started in the car. Things continued to escalate once they arrived at home and eventually 911 was called and police responded to what was a full on case of domestic violence.

Lindsay was found with a cut on her leg and there was obvious property damage as well as broken jewelry. Details are still emerging but according to early reports, Lindsay was supposedly being held against her will by Dina and the driver and that is what led to the physical altercation.

Even if it’s not her fault- this time- Lindsay just needs to seriously disappear. She is from a family of morons that have never put any of the kids above their own addictions and it’s time for Lindsay to just walk. Leave the country, get real help, revamp your whole life, change your name then return to the states and start over. I know that’s not an easy solution but seriously she’s a continuous hot mess and always on the fringe of trouble.

Or maybe Lindsay likes it that way! Maybe she likes all of the brushes with the law and that’s why she always finds herself in bad situations. Always getting away with stuff must make her feel pretty invincible, don’t you think? In her head, she can do as she pleases and there are rarely real consequences. I’m betting she played the victim here the minute the cops strolled through Dina’s front door this morning too.

Do you think charges will be filed in the Lindsay and Dina smack down? Should they be? Tell us your thoughts in the comments below!