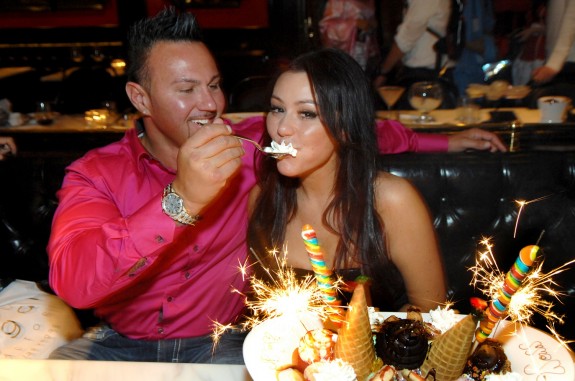 Jersey Shore’s Jenni Farley has revealed her wedding to Roger Matthews is going to be off the chain. The woman who loves the drama – hence why she is always starting fights on the MTV hit-show – says not only will she be bringing the craziness to her wedding in Las Vegas, she will also be paying to fly out all her family and closest friends to the ceremony and after bash, which must mean JWoww is loaded with cash.

During a recent skydiving lessons, Roger had popped the question… of course waiting for cameracrew to arrive first to catch it all on their spinoff show, JWoww and Snooki. Upon asking Jenni if she would marry him, the reality star explained how Matthews popped the question to her: “He said he tucked [the ring] ‘down there’,” she recalled. “He made us actually wear those [skydiving] suits and I was like, ‘Why are we wearing these like weirdo suits?'”

“Like, the parachuting suits – so he could hide it, because you actually can go in normal clothes – but he was like, ‘No, no, I want you to wear the suit’. It was funny though, because he thought he only had a couple seconds before I was to land – so he had to rip off his suit and go digging for the ring box… I actually took a couple more minutes than he thought, so he was just on [bended] knee for a while. I was hysterically crying. I hate heights.”