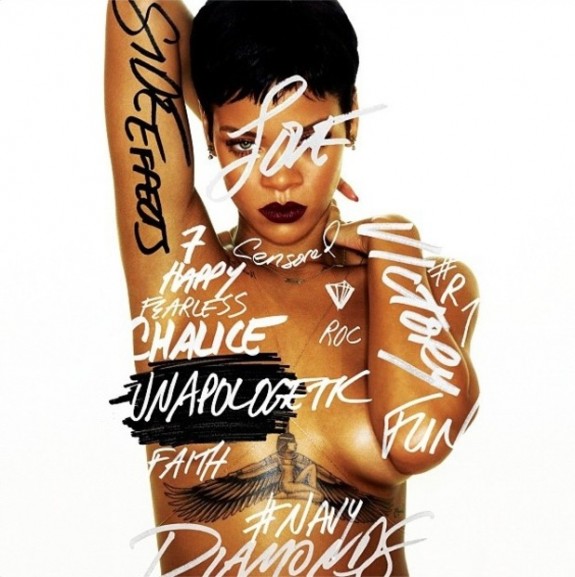 Wowza! Rihanna wasn’t lying when she told her fans “once a good girl goes bad, she’s gone forever”. The singer is gearing up to release her forthcoming studio album ‘Unapologetic’ in November and today marks the day of the release for the album artwork, and it’s pretty bad-ass if you ask us! Rih-Rih is seen topless on the album cover with a lot of text all over her body.

Now the question is, will this be acceptable to release in stores? Considering that children would pass by a music store and see this, it could be seen as too explicit — and note that we have not even seen the deluxe cover for the album yet. No doubt in our minds, some countries will definitely ban the album cover and perhaps cover it up with duct tape – so you can only see her face. Sounds stupid but it does happen. Ha.

Rih has already dropped one single of the upcoming album. Diamonds is the lead single on the record and without a surprise it’s doing very well in the charts. We’re going to assume that she’s stepping away from the dance music and going back to her roots trying to bring back R&B which died out in 2006… around the time when Ciara‘s career went downhill. Sad, right?

Well, let’s hope Rih-Rih can bring back good music because all this Starships were meant to fly is getting boring now. Ha.