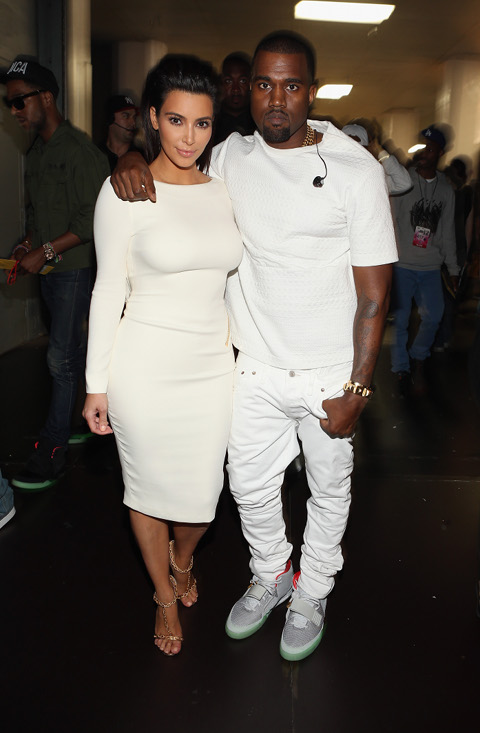 They’re both so vain and sleazy; they deserve each other! We’ve been dying to know how much time it would take for Kim Kardashian to marry Kanye West, who she’s been dating for less than a year. Of course, their relationship is pretty unique–what other relationship is celebrated daily with gifts of designer clothing, Chanel accessories, and, now, a song? That’s right! A sneak peak of Kanye’s new song White Dress leaked on line, and we are buzzing trying to figure out how to decipher it! Check out the lyrics:

“everybody got problems baby I didn’t pass / and then I used to do things that it make you laugh / like ordering a girl drink in a masquerade glass / you like being a collide as getting cold in the rain / or rocking flaunt all summer like Kurt Cobain / or that that Dolce Gabbana with a few go chains / and you the type of girl that probably deserve a new last name, / but they never let us do our thing / everybody lying on who I bang / we was on fire, but they blew our flame / ain’t no denying baby, you have changed / ’cause now your high heels clicking your lip gloss glisten, your hips start switchin / your pissed off pimping, / ’cause even when we’re kissing baby girl feel different/ friends all distant like no he didn’t / no he didn’t, is you talking bout Kitty / is that bitch still stripping tryin to get a pair of Christians / I swear to God that they gonna get you crazy / but you play it off and say how is work baby well / some other models is too cope that you walk straight / but seen still lot of man at they own hey / but babe I call you back and say that you always / and kept me on the phone”

Interpretation? White dress, new last name, Dolce and Gabana, rumours about sex. Those are the fundamentals of their relationship. How could this be perceived as anything other than an ode to Kim? They were spotted house hunting earlier this week. Despite the problems that he mentions “you have changed…when we’re kissing baby girl feels different”, the rest is pretty devoted! What do you think? Will the E! executives give Kim permission to marry Kanye? Will their wedding be covered with a 96-hour wedding special? Will you watch?!