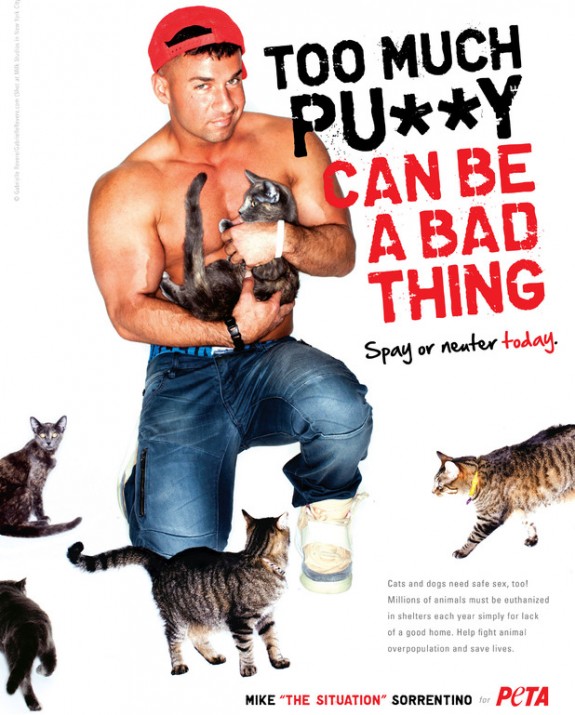 Mike ‘The Situation’ Sorrentino is posing for PETA’s new ad campaign and it looks like they’re taking it into a new direction. Remember back in 2007 when Khloe Kardashian was the face of their campaign against fur with the slogan ‘Fur? I’d Rather Go Naked!’. Well, things have certainly changed since then because somehow, Mike has landed a deal with the organization and the slogan is horrendous.

Too Much Pu**y Can Be A Bad Thing — really? Of course, we’re talking about cats here, but it’s a little too much. PETA is hoping that The Siutation can continue to lead the company to success, which is rather confusing seeing that Mike is one of the most-disliked people from the Jersey Shore. Though he claims he’s sobered up, he looks pretty crazy in the pic above.

For those who may not know, Sorrentino checked into rehab earlier this year after becoming addicted to painkillers for several years. According to the reality star, he has been sober ever since and doesn’t plan to start drinking anytime soon. Oh – we must point out those Nike Air Yeezy sneakers that Mike is wearing are just.. ugh. He wears them everywhere… literally!

Hopefully this pay check from PETA can help him not only get his act together, but buy himself some new pair of shoes.