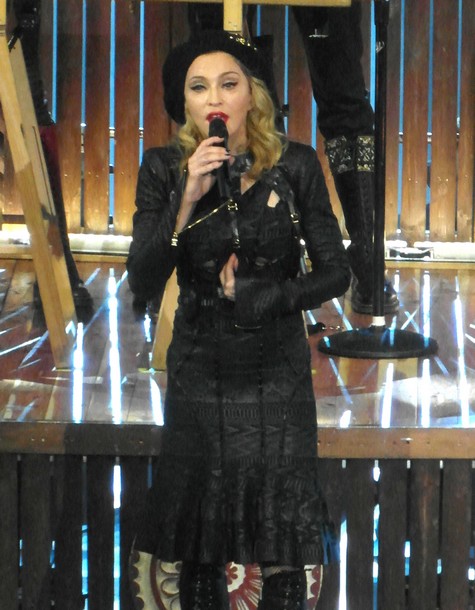 Pop star and female Bono Madonna is back in the news for helping more oppressed people. Madge, currently on her controversial “MDNA Tour”, took it up a notch with a striptease performance in the name of Malala Yousafzai, a 14 year-old Pakistani girl shot for blogging. TODAY reports that “Madonna was referring to teen advocate Malala Yousafzai, who was shot by the Taliban on her way home from school in Mingora, Pakistan, on Tuesday.”

The young woman was shot several times while riding a school bus and blogging about the importance of education. The Taliban had been targeting Yousafzai since she began writing her blog in support of the education of women at the age of 11.

After playing her humanitarian role on Wednesday night and informing her Los Angeles crowd of Malala’s bravery and brutal shooting, Madonna went on to surprise her California fans with a striptease to honor the child activist.

Just before performing her song “Human Nature” Madonna removed her clothes to reveal the name “Malala” painted on her back. The pop star dedicated the song to the Pakistani child and continued the concert without further need to advertise her love of global peoples.

This is not the first time the striptease and “Human Nature” portion of “MDNA” show has landed Madge in hot water. She used a nip slip at a show in Turkey to represent “her disapproval for the prime minister’s call to ban abortion and C-sections, and lend support to My Body is Mine, a Turkish women’s group fighting the ban.”

This is hardly the wildest thing the mother of two has done in her decades long career, and with all the the global problems to get naked for, the world will never stop seeing Madonna’s private parts.