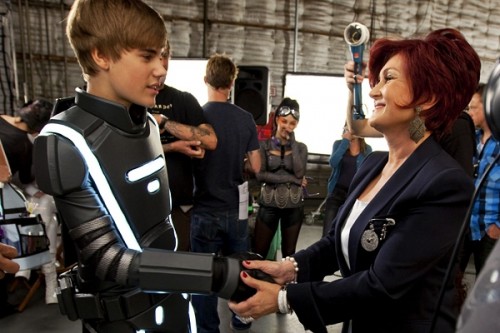 Sharon Osbourne has said that Justin Bieber’s career in the music industry will not last because he looks like a litte boy. She says that while his teenage fans are getting older, the singer continues to look like a little boy – in other words she is trying to say that he is trying to look young when he should be maturing, not only with his music but also with his image.

When asked of what she thought of the 18-year old singer, Osbourne explained: “For me, Justin is… I’ve met him, I’ve worked with him, I did a TV commercial with him. He’s a really great little guy. But that’s his problem – he’s a little guy,” Osbourne said. “His fans are growing up, they’re 18, 19-year-olds now. And that means the little girls of titties and lips, you know they’re young women. And he still looks like that little boy! He needs some hair, or something.

She adds that she doesn’t believe his career is long-lasting: “I just don’t think, from my gut, maybe my gut’s wrong ‘cos it’s not 100%, but I don’t think he’s going to stand the test of time. But you know what, I don’t feel sorry for him, because he’s made oodles and he’s a fabulously nice person and he’ll go on to do something else.”