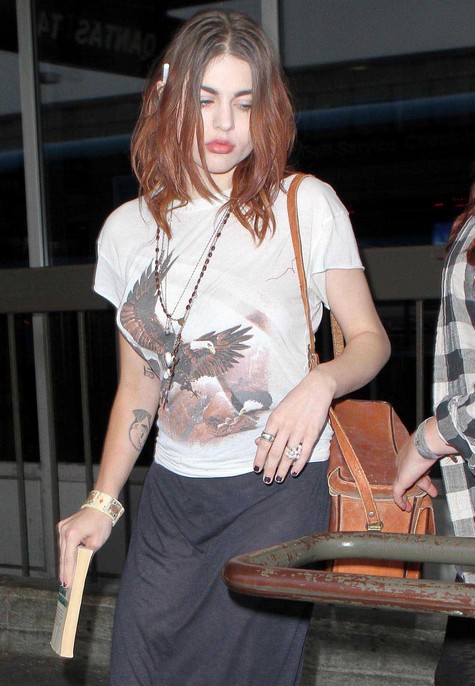 A man broke into Frances Bean Cobain’s house and did laundry when he was caught by police. Wait, what? Dude, if we ever broke into someone else’s house, we wouldn’t be doing laundry, we’d be playing on their PS3 and chilling on the microwave. The alleged suspect is a 22-year-old homeless man named Marc James Franco (is this dude for real?) He has been charged with 1st degree burglary for entering Kurt Cobain’s famous daughter’s home on the 13th of October.

Okay, wait, imagine you’re chilling in your bed and watching Real Housewives when you hear the sound of the washing machine clicking on. You take your voice recorder to do an EVP (Electronic Voice Phenomenon) and your trusty baseball bat (you’re covered either way). You walk down the long hallway with salty sweat stinging your eyes. You think of all of the Dean Koontz and Stephen King books you’ve read, while you try to imagine what could await you around that nasty corner. Snap, crackle and pop, there you stand, in your pajamas, your hand clenched around the butt of the bat and your other hand slowly crunching the voice recorder. A homeless man stares back at you and says, “Hi there, the name’s James Franco, Marc James Franco. It’s a pleasure to meet you!” Life will make no sense anymore, because a homeless man with the same name as a famous indie actor broke into your house to do laundry. What is the world coming to?

The police said that Frances was out of town when the man broke in and was allegedly discovered by a family member who went to the house to care for Frances’ dog. Franco told the relative that he was a friend of Frances’, but the trusty family member (blood is thicker than water) didn’t completely buy the story, so phoned the police. Franco has since pled “not guilty” to the crime.