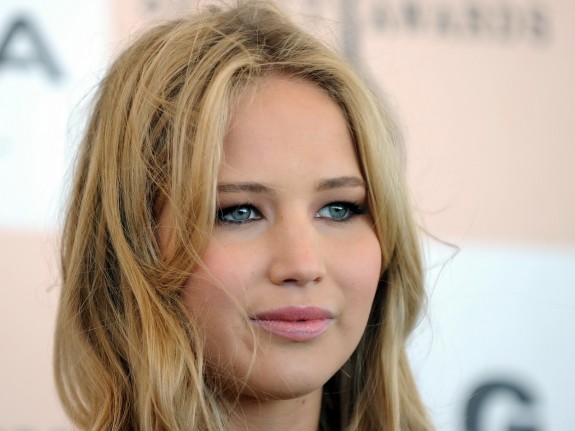 The Hunger Games.. one of the most anticipated movies of the year. With the book being so popular, of course the fans would support the film to see how good it turns out and relive the moments they had from the book. Jennifer Lawrence now says that she was terrified upon the release for the movie, knowing that once it was out, her life would never be the same again. Though she was an actress beforehand, The Hunger Games has become one of the biggest movies that she has was given the lead-role in (which requires huge responsibility).

The fans will always see you as Katniss Everdeen, whether you’re on set or shopping for a new pair of shoes. A great example would be Kristen Stewart — many people were so shocked when she made a public apology that she cheated on R-Patz because we only see them as Bella and Edward, in other words Bella is cheating on Ed. Jennifer, who is featured in this month’s issue of Vogue UK, told the mag:

“I was really upset the day that The Hunger Games came out. I was shaking all day wrapped in a blanket,” she admitted, adding: “[I remember a friend saying,] ‘Dude, have you seen what they’ve done to Britney Spears? There’s a responsibility I’m aware of… In one sense, luckily, it comes naturally because I don’t stay out beyond midnight,” she noted.

When asked on her what her daily celebrity lifestyle was like, the actress explained that it’s nothing special — she just behaves like a regular girl who tends to shy away from situations: “I don’t really have an exciting life… It’s funny, my friends were joking about how I was so not the person who’s in charge of taking turns to go in the hot tub. I just appear that way.”