The Truth Is Out: Britney Spears Shaved Her Head To Hide Drug Evidence In Her DNA! 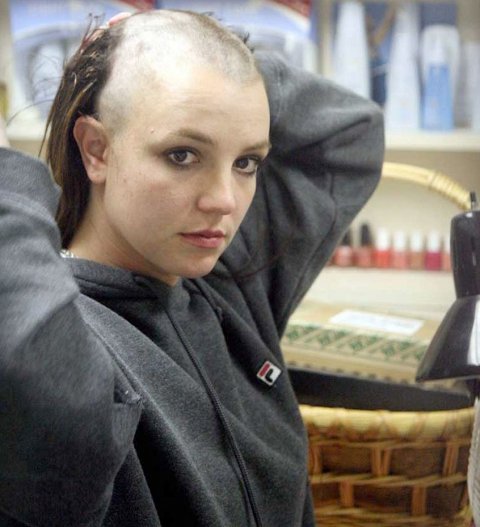 Where were you in 2007 when news broke of Britney Spears getting crazy with a razor? I was in my middle school cafeteria and a friend told our lunch table that Britney had gone totally insane and would probably be forced into rehab. Speculation was all over the place, prompting the infamous “Leave Britney Alone!” YouTube video. We waited five years to learn the truth, and now her former manager Sam Lufti is coming clean. Sam is currently in the process of suing Britney’s mom Lynne Spears for writing a tell all book that he claims violates contracts.

TMZ reports, “Sam’s lawyer, Joseph Schleimer, has been telling the court … Britney was a serious drug-abuser … who had a penchant for crystal meth. Schleimer suggested Britney was concerned that a judge would test her hair for drugs — and when it turned up positive, she would lose custody of her kids. So, Britney … being Britney … believed that if she chopped off her hair, she could beat the drug test … at least that’s what Lutfi’s lawyer is implying.”

I doubt that that would be enough to hide all evidence of drug abuse, but that’s what Lufti insists Britney thought. I guess that desperate times call for desperate measures! TMZ previously reported that “Lutfi claims Britney was on meth and other drugs and he worked 24/7 to rehab her, to no avail.  Lawyers for Britney and Lynne Spears will make the case that Sam was like a sleazy drug pusher and fame whore who fueled Britney with drugs to control her and isolate her from her friends and family.”

This trial isn’t doing anything for Britney’s reputation, that’s for sure! What do you think of these allegations? I can’t imagine his lawyer would use them in court if there wasn’t some evidence that they were true. Time will tell what Britney was going through, but one thing is certain: Sam Lufti is a sleazeball and just wants money!