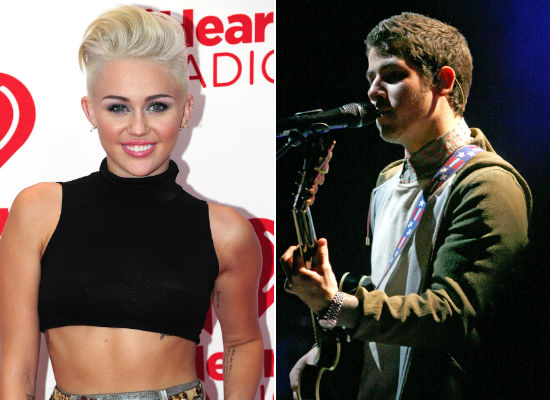 Miley Cyrus believes the new song that the Jonas Brothers have recorded, titled Wedding Bells, is blatantly aimed at her. The singer who had a relationship with former boyfriend Nick Jonas called in to Ryan Seacrest‘s KIIS-FM radio show where she voiced her opinion on the song, adding that though she insists the song is about her, she doesn’t have any hard feelings towards Nick.

“I don’t know who else is getting married… so I feel like that’s pretty blatant,” she told Ryan yesterday morning. “Everyone has to write songs that are about things that they felt,” the 19-year-old admitted. “So you can’t ever hate on someone for writing about something you’ve been through. I think that you kind of get a fair warning when you date an artist and someone that’s a writer. When you’re going through things, you’re going to end up hearing about it on the radio.”

The song is definitely going to feature on the group’s forthcoming album next year, after seeing the positive response to the track. Nick even went on to explain that the song which was written by him makes him very uncomfortable but sometimes when having gone through something in life, it’s best to express it in your lyrics: “So far during the creation of our new record there’s been a wide range of subjects we talk about,” Nick Jonas told the crowd.

“It’s about enjoying those moments and staying in those moments, and some are momentary, in the sense you have to write a song and apologize for it later.” He added: “I don’t know if I’ve ever written a song that makes me as uncomfortable as this song does.”