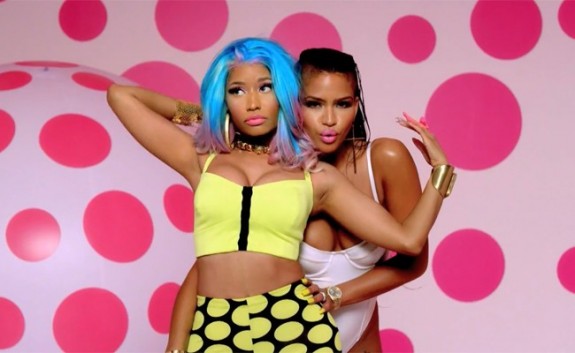 Yup, we had to mention that this woman is your new American Idol judge, and in our opinion we can’t see why producers would hire her. Though Nicki Minaj is bringing something “unique” to the music industry, her newest song and its music video make no sense whatsoever, showing people that they can forget about going to college, as long as you have a good body and show yourself almost naked, you’ll be financially covered.

The duet with Cassie is kind of odd, considering that Cassie hasn’t had a hit since 2005 when she released Me & U. Now, you might wonder how she’s managed to look so good all these years. Simple answer: Diddy. The rapper has been dating the so-called singer for 6 years and they reportedly got engaged last month. Nicki met Cassie way before she was famous — the two were buddies and would hit up nightclubs together, so it looks like Minaj kinda wants to help a friend out to get herself out there again.

Well, the song proves that these two are very, very immature girls. If Rebecca Black had released this, we would have probably praised it for its stupidity but for a 29-year old, it’s a little… too much. Anyway, you should be the judge of the video — but we’re warning you now, your eyes might run off and never come back after hearing this jibberish.