Christina Aguilera Isn’t A Fan Of Wearing Underwear, Tells Chelsea Handler: ‘I Like To Be As Free As Possible’ 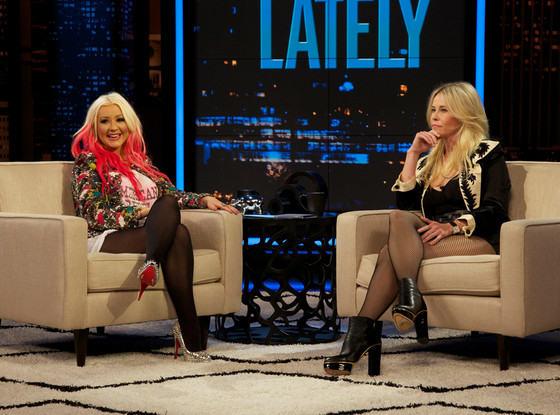 Christina Aguilera is not a fan of wearing underwear when she leaves the house. The Voice mentor told Chelsea Handler on her show, Chelsea Lately, that she doesn’t wear underwear because she feels it is empowering and also makes her feel more free. The singer who says she’s a big fan of the comedian, says: “I don’t like to wear underwear,” Us Weekly quotes her as saying. “I like to be as free as possible at all times.

Christina added that she’d only agree to come on the show if Chelsea dared to come on the show by showing off her legs. Christina continued: “It’s just who I am… It’s empowering. It’s p***y power! I’ve heard all about the s**t Chelsea has talked about me not being a fan of wearing pants,” she quipped. “So when they asked me to come on, I thought, ‘I’ll do it, if Chelsea does one thing for me…'”

Aguilera who turns 32 in December recently said that she embraces her body changing – especially when she welcomed her son to the world.  While many have criticized her in the media, she says it “doesn’t bother her,” as long as she’s happy with who she is: “Some people are afraid of change and [feel] that getting older is a bad thing, but I really love maturing and gaining wisdom,” Aguilera said.

“And the experience of being pregnant and having a child and seeing what a woman’s body can do is amazing. “Whether people love it or hate it, at least I know I was staying true to myself.”