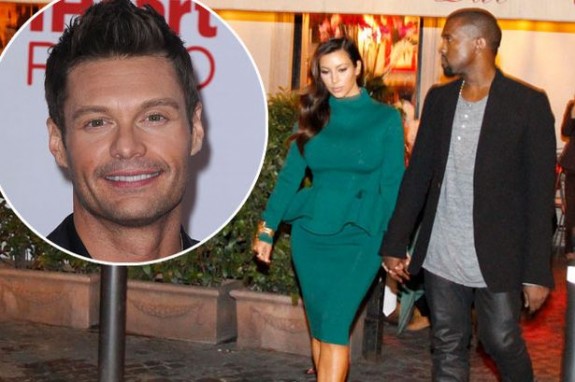 Looks like Ryan Seacrest has spoiled the surprise. According to the TV-mogul, Kanye West plans to propose to his girlfriend of 9 months, Kim Kardashian, on her birthday tomorrow (21st October). The couple who have been inseparable since announcing their relationship to the public, have been in serious talks to tie the knot as Kim feels she’s missing out on marriage life and having a family. Her sister Kourtney Kardashian already has two kids by boyfriend, Scott Disick, while Khloe Kardashian recently celebrated her third wedding anniversary to her husband Lamar Odom.

Kim’s recent marriage to Kris Humphries failed when she pulled the plug just 72-days after saying ‘I do’. Now, Kanye has planned to propose in a “very romantic city” sources say – which makes perfect sense considering that they are currently in Rome. Ryan, the executive producer of the Kardashians’ tv shows explained: “I think we could definitely see an update on this story on Monday.”

It was also recently reported to RadarOnline via their sources that Kanye wouldn’t be waiting any longer to propose to Kim. The rapper desperately wants to start a family of his own after seeing his best friend Jay-Z and Beyonce welcome their daughter in January. “It’s only a matter of time before Kanye pops the question,” the source says. “They are madly in love with one another and as far as Kanye is concerned he wants to spend the rest of his life with Kim. It’s just a case of making sure the ring is perfect because she’s his princess.”