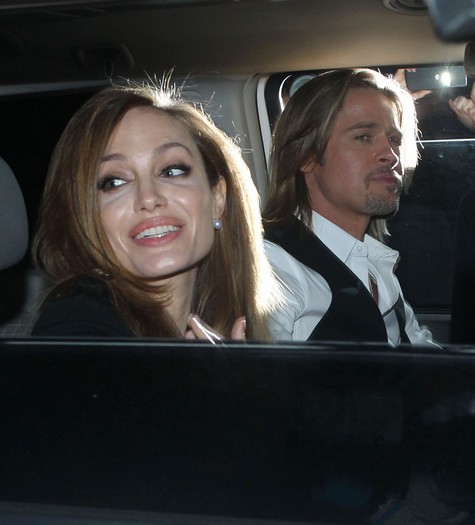 Brad Pitt and Angelina Jolie’s fairytale life might soon come to an end. No, we’re not referring to the end of the world; we’re referring to the cessation of their engagement and relationship. According to a new National Enquirer report, Angie is petrified that Brad’s drug and drinking issues might lead to him cheating on her and/or verbally abusing the children. We’re calling this a sham and asking, what the duck?

Insiders close to the couple revealed that Pitt finally snapped when Jolie insisted that he go to rehab. “Even though Brad denies up and down that he’s still using drugs, Angie is convinced that he’s secret­ly abusing pot and possibly other drugs behind her back. She’s also turned off by his excessive drinking,” a source revealed. Abusing pot? Oh no, Brad! Don’t abuse the gateway! Allegedly, Brad stormed out of their French chateau after a little altercation. Their fight was due to “quarreling over wedding plans.” Angie also demanded that Brad goes to rehab; otherwise she won’t walk down the aisle with him. It might just be our elephant memories, but didn’t the couple say they would only get married once gay marriage is legalized? There was never any reference to drugs, drinking, and violent behavior.

Brad jetted off to Los Angeles to promote his new documentary on America’s failed war on drugs, “The House I Live In.” It is here, in the city of angels and starlets, that Brad joked to shocked onlookers, “I’m Brad Pitt, and I am a drug addict.” He continued, “My drug days have long since passed, but it’s certainly true that I could land in any city and any state and get you whatever you wanted. Give me 24 hours or so, and I’ll know where to find it.” Okay, cool guy. Whatever, you say! This is not the first time in Brad Pitt’s 48-years that drug use became a thorn in his side. He blamed his drug use as one of the reasons why his first marriage to Jennifer Aniston failed. “I started to get sick of myself sitting on a couch, holding a joint, hiding out,” the Hollywood heartthrob admitted.

The drugs and drinking are not the only two components to Brangelina’s alleged shipwrecked relationship. According to the National Enquirer, Angelina is terrified that he might cheat on her, especially since his new television advertisement for Chanel No. 5 might have him paired up with “young, sexy model types.” Whilst we do not completely believe the drug use scandal, we do believe that Brad will always be tempted to cheat. He did it once before, so a second time won’t be any different. However, whether he will cheat on the most beautiful woman on the planet, is another question altogether. The source added fuel to the fire and said, “Her insecurity is nothing new, but her paranoia has ramped up lately because Brad has been somewhat distant. She’s always thinking he’s hiding something from her. She knows from first-hand experience that when Brad gets bored in a re­lationship, he looks for stimulation elsewhere.”

Who is to blame? Should Jolie take a chill pill and relax a bit? Should Pitt give her more attention? What is going on? Are these two headed for Splitsville? Let us know your thoughts in the comments below.