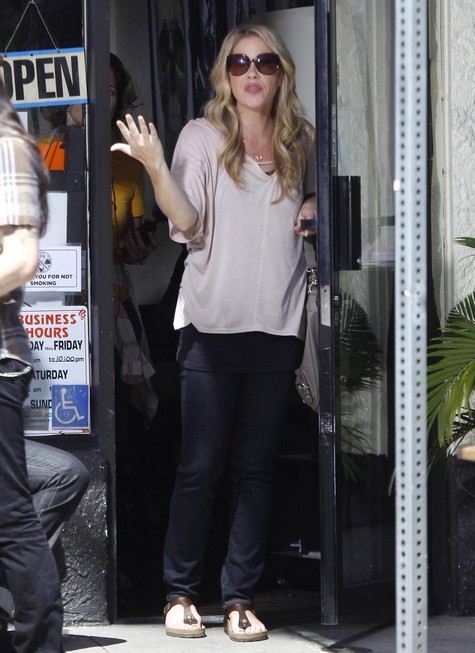 What’s up this week with crazy people? Not only was Justin Bieber accused of stealing a credit card to enlarge his penis, but two – count that – other stars also experienced the wrath of psychotic people. We reported on Hollywood Hiccups yesterday how Leeza Gibbons was harassed and stalked by a crazy person on Facebook. Unfortunately, it doesn’t seem like the crazies are letting up. According to TMZ, a scary Twitter fan of Christina Applegate is threatening to blow her f****** head off.

The LAPD launched a full-scale investigation into the alleged threats. Sources close to the situation say that Applegate’s fiancé, musician Martyn LeNoble, received the threatening tweets on the 20th of September. According to documents filed, these threats included, “You stole [Christina] away from me! If not for you, she would be mine. I will not accept this. I am going to kill you!” Whoa, dude! Why don’t you take a few thousand Valiums and chill your guava?

Several of the other violent threats included, “I’m going to bust your head in for taking her away from me! Be afraid, very afraid!” Also, “You think this is a joke? I want to see how funny you think I am when I blow your f******* head off”. The LAPD obtained a search warrant a week after the threatening tweets were sent, but according to the search warrant, Applegate’s fiancé “didn’t recognize the Twitter profile sending threats.” Police want to access Twitter’s records related to the profile, but it has since been deleted. Sadly, Twitter’s anonymity is the perfect reason for insane people to go… Insane? It’s like going on a cruise with Ted Bundy’s faceless cousins.

The crazy stalkers crawled out from underneath the Halloween pumpkin, because this is the first time in quite a few months that we’ve seen so many cases of Twitter, Facebook and/or email abuse. October isn’t that hot anymore for these celebrities, now is it? Let us know your thoughts in the comments below.

It’s A Girl For Christina Applegate!

Christina Applegate Works the Pole with Her Bump – Video