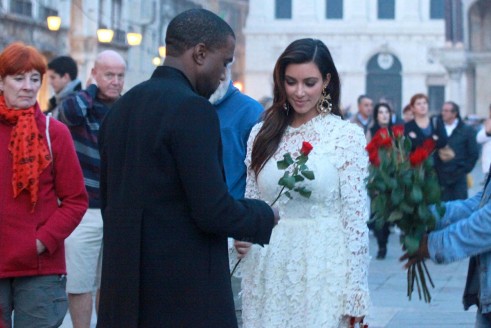 Kim Kardashian has taken to her official blog to let everyone know that Kanye West spoiled her over the weekend as they headed over to Rome and Venice for romantic getaway from the rest of the Kardashian family and cameracrew to celebrate the reality star’s 32nd birthday. Pretty weird that she decided to ditch the cameras following her every move but we’re guessing Kanye is not happy with the reality show, as we previously reported.

Kanye isn’t a fan of reality television, and rarely made appearances in the recent season of Keeping Up With The Kardashians. So, since Kim’s fans won’t be seeing what she got up to in Italy, she decided to fill everyone in on her blog where she explained that West had taken her to a secret location, telling her he had booked her for an appearance (work), but it was actually a surprise for her birthday.

“I thought I was going away to work, but it was really a birthday trip! What an amazing surprise!! We started in Rome, saw the Colosseum, went to the Vatican and saw the Sistine Chaple. So breathtaking!,” Kim explained. “Then we went to Florence and stayed in this incredible castle, saw Michelangelo’s David, and shopped around town.”

Kardashian continued on all the things she did on her trip to Europe. She added: “We saw all the sights, visited some beautiful churches and all the famous monuments. The last stop on the trip was Venice, where I spent my birthday. What a romantic weekend! One I’ll never forget. Xo”