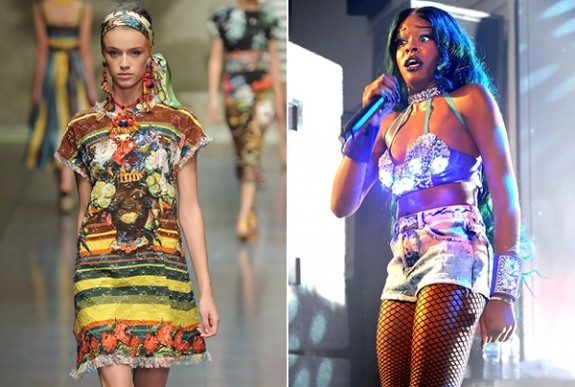 Dolce and Gabbana are slowly becoming a sinking ship, and now that they have unveiled their newest clothing collection, it has put them into a position they definitely wouldn’t have wanted to be in. Azealia Banks has voiced her opinion on the new collection that the label unveiled at a fashion show, which she described as being racist to black people due to the black face that is seen in the middle of the dress, with the African-styled earrings and colors. It sounds bizarre, but it’s the truth.

Thought Azealia was the only person who thought this was racist? Well, you’re wrong. Many fans of the label have questioned the design of their new clothes and people aren’t too happy. Banks, who is someone who doesn’t shy away when she has a strong feeling about something, explained on Twitter that D&G’s racism is not art, before adding that whoever designed the clothes for the collection needs a swift kick in the mouth.

“Definitely boycotting Dolce & Gabbana.” She continued: “Whoever designed that racist ass Dolce and Gabanna collection needs a swift kick in the mouth and a big d**k up the ass… I really hate when people do corny, racist things then try to justify it as “art”… It’s all just really unnecessary. the clothes in the collection were fine without all the “black mammie” imagery… you guys should be so ashamed of yourselves.”

In happier news, Azealia recently shared the news that she will be dropping her debut studio album next year, February, after it was scheduled to release in September. The singer had needed more time in the recording studio since she had been touring in the UK and making appearances in the United States, which kept her from dropping vocals on a few of her tracks. The album has been titled Broke With Expensive Taste. “Broke with Expensive Taste will be out first quarter of 2013 on Feb 12,” she tweeted. “I have ALOT of REALLY excitin ish happening in btwn! it will ALL make sense as these things start to unravel.”