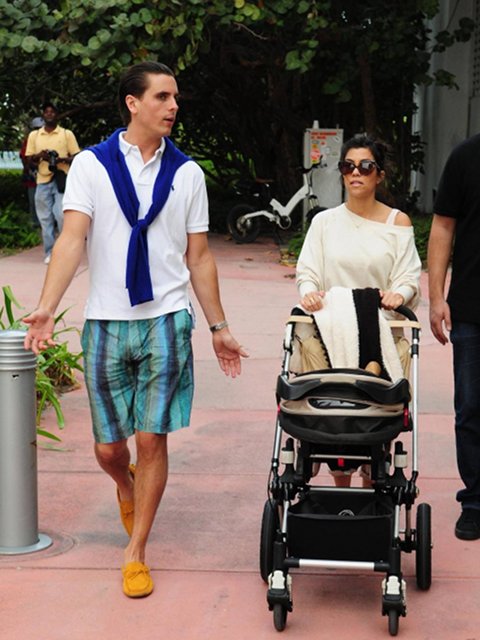 Can all haters of Scott Disick let out a collective sigh of frustration? If you have ever had the scarring displeasure of seeing a photo of Scott, you can tell he is an apex douche bag. The guy has no sense of loyalty, responsibility, or respect for anyone! Viewers of Keeping Up With The Kardashians can attest to his laissez-faire attitude towards everything in life–except clubbing, drinking, knocking up Kourtney Kardashian, and wearing fancy dress. This is the guy who left his toddler son in a locked car during the summer in Los Angeles. Not really “Father of the Year” material. But Scott is ready to step up and cross the line from dithering jerk to man–that’s right. Scott was spotted shopping for wedding rings.

Kourtney has been on ring-watch since she announced her first pregnancy. With all of the E! contracts she and her sisters have signed, I’m sure there’s something that will ensure for a high class (ie, trashy) wedding aired prime time for Kardashian lovers. With Kim Kardashian moving forward so quickly with boyfriend Kanye West (house hunting in Florida, his not-so-mysterious song about a girl in a white dress), there may even be a back-to-back wedding special in the works. While in Florida filming Kourtney and Kim Take Miami, Scott took a day with some friends to go to a jeweler, where a source reports he spent a lot of time looking at a huge selection of engagement rings.

“Scott was most definitely shopping for engagement rings,” the source reports. “All of them were large!! Scott and his friend looked at a whole selection of amazing rings, all diamond, all different cuts, sizes, settings–he certainly is taking his time and wants to make the right purchase.” What do you think of Scott’s ballsy move? I think Kourtney could (and should) do better. Scott is an arrogant and short-sighted playboy. But then, the Kardashian Klan isn’t much better. It’s a hard one to call. What do you think?