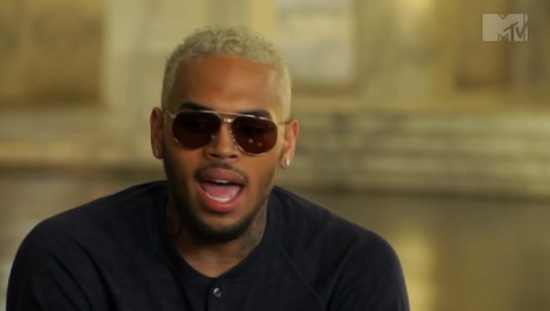 Chris Brown CONTINUOS to talk about Rihanna. Enough already. It might have been three years since Chris proved to the world what kind of a man he was when he beat Rih-Rih up in a car after she confronted him about a text message from an unidentified woman, yet the singer still gets constant abuse on his Twitter page and many other social networking sites who directly write to him, saying he’s a vile person for what he did. Most bizarrely would be the death threats he has received within the past few years.

On MTV’s This is How I Made It, the singer sat down to clear a few things up, whilst explaining the rise of his career as a musician, and of course the lows. Chris says that he doesn’t hate people for judging him constantly, referring back to the incident, because at the end of the day he can not make a person like him or hate him, all he can do is be a better person, he explained.

He adds that people are always going to look back at the bad things he had done in life: “I can’t hate people for making judgment on me, or making a decision of liking me or not liking me,” Brown commented. “All I can do is try to better as a person. And I’m good with knowing everything isn’t always going to be perfect. [People are] always gonna know me for situations and life obstacles,” he said.

“For me to have that achievement [of winning a Grammy Award], and to go through people’s whole opinions changing of me, to get personal opinion back and having to gain personal success back – it’s not all the way back, you know – but it’s been one of my most humbling experiences.”