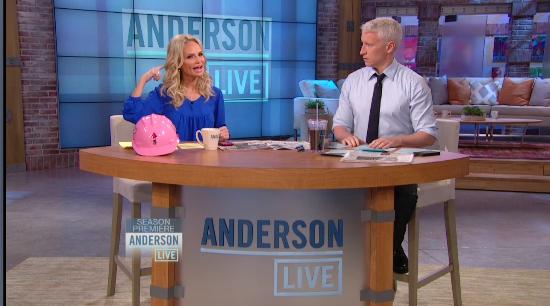 Anderon Cooper‘s chatshow, Anderson Live, will not be renewed after its second season comes to an end, it has been confirmed. The show which struggled to keep viewers watching went through a drastic change-up after season one as the ratings kept declining from week to week and though Anderson revamped version had special guests such as Kelly Osbourne, Tamar Braxton and Kelly Ripa on the show, it didn’t help to try and revive the show in the long run.

A spokesperson from Warner Bros made the announcement earlier today, stating that the team was incredibly proud on what Anderson Live has achieved, however, they have come to a decision that it would be best not to renew contracts for a third season – possibly due to the ratings. “While we made significant changes to the format, set and produced it live in its second season, the series will not be coming back for a third season in a marketplace that has become increasingly difficult to break through,” Warner Bros’ spokesperson explained.

Meanwhile, Anderson continued the statement by adding that he has thoroughly enjoyed his time, working with the producers, writers and staff members who made the show what it was. He continued that even though the show may be coming to an end very soon, he will be enjoying himself until that time comes. “I look forward to doing more great shows this season, and though I’m sorry we won’t be continuing, I have truly enjoyed it,” he commented.

Anderson’s chatshow first went live in September 2011 and mainly focused on news and lifestyle issues, while season two welcomed more topics, such as discussing entertainment gossip in the first ten minutes of each show. Cooper has not revealed if he has any other projects lined up after his contract expires, but we’re sure we will see him again on our TV screens very, very soon.

Anderson Cooper Could Care Less What Star Jones Has to Say