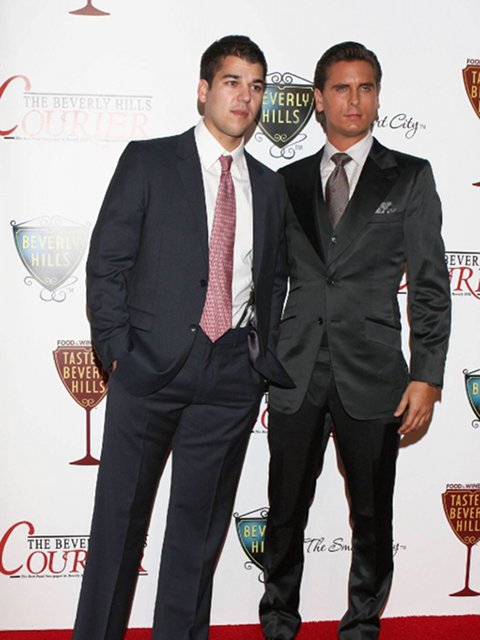 We always thought the not so romantic ‘bromance’ between baby brother Rob Kardashian and his sisters various boy toys was a bit odd, but it sounds like the rumors may be true. And so, their family becomes even freakier than I ever expected! (Note: It isn’t Rob’s not-so-secret homosexuality that I find disgusting, it’s that he is desperate to hook up with his sister’s various ex-lovers. That has to be incest, right??) Last night on the E! Special Keeping Up With The Kardashians: Dishing It Out, those whose attention spans allowed were ‘treated’ to clips of never before seen footage. Memorable moments like Rob’s colonoscopy, Rob kissing Kourtney Kardashian‘s future hubby Scott Disick, and Rob being cleansed with sage by Khloe Kardashian were abundant, as was the need for airplane vomit bags.

Besides the fact that it was so hideously, obviously scripted (yells of “we’re dishing it out! We haven’t seen this before! Let’s dish it out!” permeated the hour-long special), we learned that, even with puppeteers, this family can’t keep it together. The most jaw-dropping part was not Kris Jenner calling out Kanye West for staring at Kim Kardashian‘s bulbous ass, it was Khloe calling Rob gay! Their baby brother has always had a bizarre (and possibly Freudian) relationship with Kourtney’s baby daddy and almost fiance Scott, general spooning, partying, European cheek kissing, and groping gets about 8 minutes of each episode. I thought I was the only one who recognized that lingering stare Rob gives Scott, but Khloe noticed too and is not keeping quiet about it!

And, of course, Scott isn’t exactly protesting–last night we saw footage of him asking Rob if they could rub noses like Eskimos. I don’t know how Kourtney could stake claim on her man when the impending threat is her brother. Rob has been struggling emotionally ever since his trashy ex-Disney channel star girlfriend Adrienne Bailon dumped him and landed her own E! series. I imagine that the tragic hair loss doesn’t help his self-confidence either. But cat’s out of the bag, and I think Rob needs to learn to love himself–from his hairline to his Adrienne tattoo to his gay, man-thieving hands! My only concern is for his sisters–that has to be awkward at Christmas dinner to know your brother is madly crushing on your boy toy. What do you think?