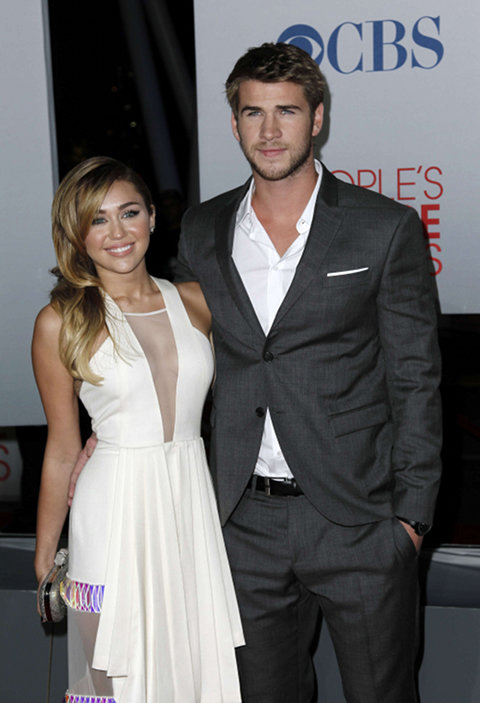 I was shocked too, but I think two of them are reasonable. Kind of. Although normal people only get one day to be the ‘best day of their life,’ celebrities are special and therefore get more. They say money can’t by happiness, but they’re wrong, because Miley Cyrus is planning to do just that. The recently-engaged ex-Disney pop star is engaged to longtime beau Liam Hemsworth, Thor’s younger brother and an Australia native. Apparently the couple have decided that, with such a spread out family, it is most practical to have three separate weddings.

A source explained their plans: “Miley is planning to wear a different dress to each one. The wedding budget it already more than $1 million.” Apparently the couple have decided to get married in Los Angeles, where they life, in Tennessee, where most of Miley’s family lives, and in Australia, where Liam’s family lives. The source let slip that we can expect this all in 2013, although if the couple is having 3 honeymoons has yet to be determined. Although I bet every day feels like a honey moon when you are so outrageously rich.

Miley has promised to release a new album before she ties the knot, which gives us some time to digest this cray cray. I honestly don’t understand why the couple can’t just rent out a Boeing 747 to pick up all their guests, fly them to a single destination, and enjoy one huge wedding day. Besides which, it seems insincere to say “I do” so often–sort of like putting on a play, but it will only really count where she did it the first time. And whose family gets to go first? I would expect that the LA and Tennessee guests will overlap, because it’s only a 3 hour flight. This is all pretty weird, right? What do you think Miley should do?