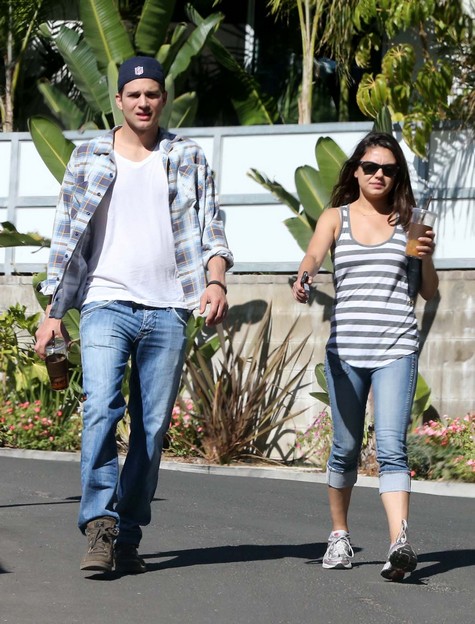 Mila Kunis forgot to inform media outlets that one should never, ever “put [a] Baby in the corner”. Recent rumours swirled on the webbed feet of the internet that Mila was pregnant with Ashton Kutcher’s first child. Unfortunately, for the poor Kutcher sperm cells, this rumour was disproven! During a stroll in Los Angeles over the weekend, the actress was photographed with a “rounder-looking” tummy than usual. And, as is natural, the internet exploded with Kutcher baby memes and Black Swan jokes. None were exceptionally funny.

A rep for Mila halted the rumours with a resounding, “She’s not expecting.” We’re glad to hear that! Why are we glad? Well, we know Kutcher is not the most trustworthy guy on the planet, and there’s still that creepy little Demi Moore factor. The Punk’d creator is still legally married to the neurotic Moore, so a baby mama in the form of Kunis would have only upped Kutcher’s sleaze factor. (Not even the poor Jerry Springer people were this Gossip Girl)

The history of Kutcher and Kunis extends far past the turn of the millennium. They met in the late 90’s on the set of That 70’s Show, a situational comedy that initiated the careers of Kunis, Kutcher, and Wilmer Valderrama. The show’s generation defining humour was further accentuated by Kutcher’s dumber-than-duck acting abilities.  Fortunately, Kunis was able to break loose from the shackles of television sitcom hell and prove herself as an exceptional actress. It’s regrettable that Kunis is now more in the news for her rekindled relationship with Kutcher, than for her acting abilities. Hey, if that’s how the cookie crumbles…

Earlier this month, a source told Now magazine, “She wants kids as much as he does. But not while he’s still married to someone else.” We’d hope so. Let us know your thoughts in the comments below.