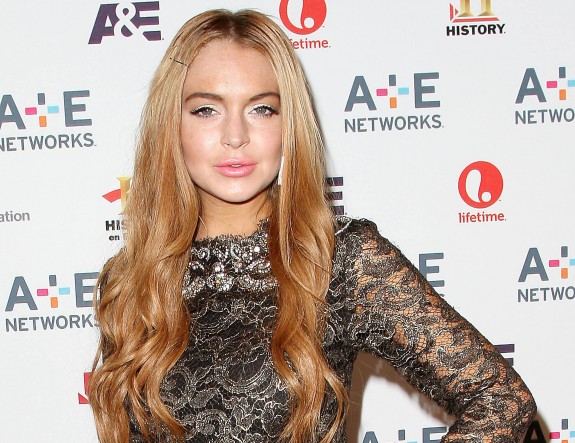 Lindsay Lohan just needs to… be swept away by Hurricane Sandy with these idiot comments she has been making on Twitter, telling people to stop overreacting. The delusional troubled actress, whose mother and siblings share a home in New Jersey, took to the social-networking site to mock the situation, before questioning herself why everyone is creating such a hype on it.

“WHY is everyone in SUCH a panic about hurricane (i’m calling it Sally)..?” Lohan said on Twitter. “Stop projecting negativity! Think positive and pray for peace …#hurricanesassy,” while Governor of New York State Andrew Cuomo told the Financial Times: “Do not underestimate this storm. These forecasts for the surge are really extraordinary. They are talking about surges that we have not seen before.”

This isn’t really shocking, seeing that it’s coming from Lindsay… the same woman who stole clothes from the set of Scary Movie 5. An insider close to the production team tells The National Enquirer: “It was the talk of the set in Atlanta,” the source claimed. “The clothes were on her wardrobe racks. Some nice tops and skirts and other items were gone.

“I guess Lindsay thought she was entitled to it, like free soap at a hotel. All the other actors knew about it, but the producers just put it down to the price you had to pay for doing business with Lindsay. The wardrobe people were unhappy about the missing clothes, but at the end of the day the producers decided it was more trouble than it was worth to try and get them back,” the source was quoted as saying.