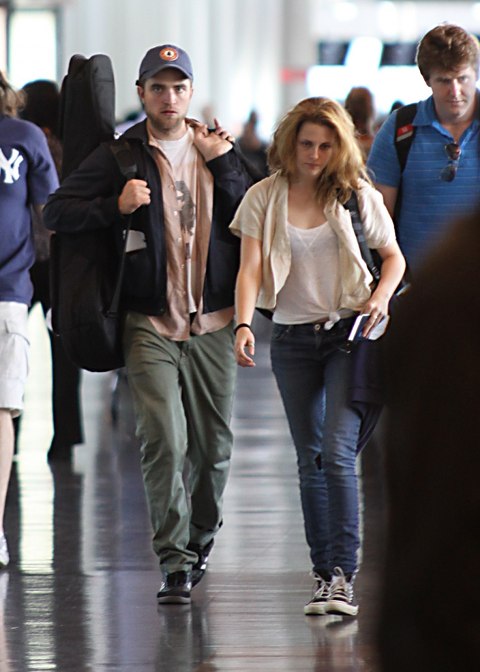 Times are changing, I guess, but what ever happened to some nice chocolates or a fancy European car? We were disgusted to report that Twilight costars Robert Pattinson and Kristen Stewart were reunited (whether their relationship is 100% sham or not is still debatable. Whatever the truth is, it doesn’t matter–they’re getting tons of press, just like the Twilight studio wants.), and now it seems that Kristen had to engage in some pretty hot and heavy groveling.

They say that money can’t buy love, but it certainly seems to in Hollywood. Extravagant gifts and the lifestyle in general demands a pretty sturdy swipe on the credit card, but down-to-earth, oily haired Kristen doesn’t believe in buying back her man! A source reported that “[Kristen] sent Robert the film after bombarding him with hundreds of texts, emails and answerphone messages. It was a last-ditch attempt at getting him back and she spent ages making the video montage using hundreds of photos and hours of home footage of nights out and holidays.”

It is actually pretty thoughtful–what better than some classic nostalgic reminiscing to reignite the flame that burned so passionately? And we know that Rob is a sucker for anything romantic or emotional (even though he recently said he’s never been head over heels in love before), so Kristen played on that heavily.

It’s all too easy after a break up to feel sad about all the good times, and so we hope that, with time, Rob will gain some perspective and be able to move away from the vampire queen of whoredom and baggy shirts. No offense, Kristen. I don’t care how many indie films she stars in, her acting is solely founded on sighs, blinking, and shrugs. I won’t have anything good to say about her career until she starts trying! What do you think? Is the video montage sweet or underhanded and manipulative?