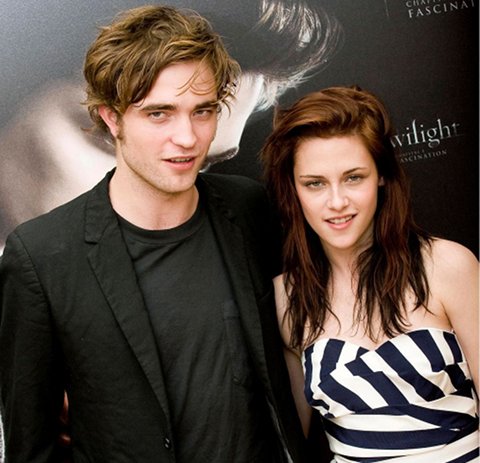 Please raise your hand if you think that Kristen Stewart should never procreate. Unfortunately, she and boyfriend Robert Pattinson disagree, and the undead couple have kids on the horizon! Earlier today while speaking on a panel at a Twilight Saga: Breaking Dawn Part 2 press conference, the couple took questions about their time working with Renesme, the undead, half human baby that their characters Bella and Edward have.

Apparently Kristen and Rob were both really excited about working with kids during production, and Kristen went so far as to say those were her favorite scenes to film. And Rob? He was on set to sing the babies to sleep whenever needed, and Kristen thinks he’ll make a great dad! Kristen is quoted as having said, “I can’t wait to be a mom. But, you know, I can wait.” Thus, once again, proving her eloquence and possession of a dozen brain cells.

The couple are recently reconciled after news of Kristen’s affair with Snow White and the Huntsman director Rupert Sanders hit news stands. Despite spending the summer as far apart as possible, Rob took Kristen back after she made him a slide show presentation of photos from better times. Sucker that he is, he was all too happy to bury the hatchet, and just in time for the Twilight promotional tour!

Whether their relationship is as fictitious as their vampire alter egos, we may never know. But one thing is for certain–they must never procreate! Can you imagine the dry witted, wholly vain, baggy t-shirt wearing spawn they may produce? Best to save the weird sex for the teen movies! What do you think? Would Kristen Stewart make a good mom, or would she just roll her eyes and sigh when the baby needed feeding?