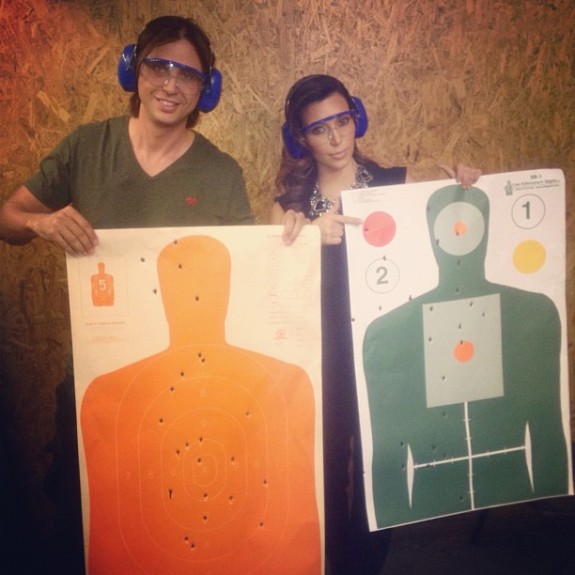 Anyone who’s seen a commercial for an action flick knows that women with weapons are hot. Or maybe it’s the tight pantsuits that are snug in all the right places. Whatever that x-factor is, Kim Kardashian is trying to harness it. Today, she tweeted pictures of herself at target practise with ber possibly-gay BFF Jonathan Cheban, who is an frequent guest on her reality show Keeping Up With The Kardashians (most often shown being snubbed by Kim, or being made fun of).

Kim sent her followers two photos–one of her aiming at the target, the other of her and Jonathan showing off their fine shooting. I have to wonder if she hit the target the same way she hit the skeet her first time shooting with step-dad Bruce Jenner. Or maybe she really does have good aim. She captioned the photos “intruders beware” and “bang bang!”, which amuses me to no end. Of course, celebs do face an alarmingly high amount of home invasions, but would Kim actually shoot a fan who crossed the electric fence? 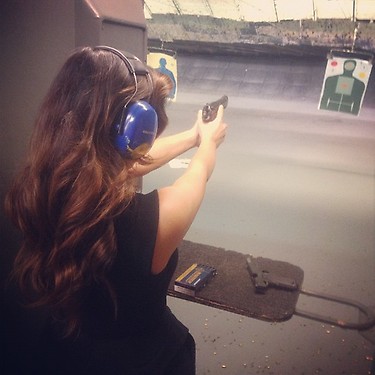 Regardless of her good aim (fictitious or otherwise), I’m sort of miffed by her cavalier attitude. Sure, target practice is fun, and god knows that guns are pretty commonplace in our society, but I’m annoyed that she is using dangerous weaponry as a way to come off as sexy, and that she’s making a joke of it. Whether you’re on team “Guns Kill People” or team “People With Guns Kill People”, we can agree that guns are dangerous weapons that shouldn’t be taken lightly. I hope that Kim never has to use a gun in self defense, and I’m glad she has the opportunity to learn one of several modes of self defense, but I can’t shake the “God, look what Kim is doing now, I hate her” feeling. What do you think? Innocent joke while trying to be sexy?