Hurricane Sandy Telethon – Celebrities Call for Donations, but Not All of the Television Networks Were So Keen 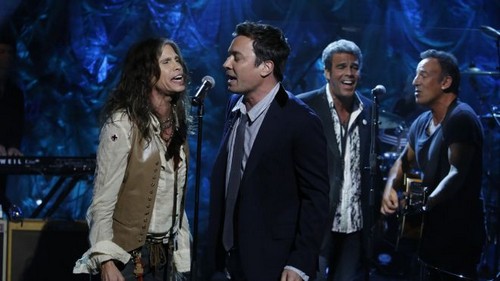 Celebrities from all over the USA performed, appeared, and gifted at NBC’s benefit concert for Hurricane Sandy victims. The hour long show was hosted by the Today show’s Matt Lauer and calls for donations were given by Jon Stewart, Tina Fey, Whoopi Goldberg, and several other notable celebrities from all walks of the entertainment industry. The solemn telethon was aired from the NBC studios in Rockefeller Center, several blocks north of where the city was stuck without power for the past week.

Music acts from all over America came together in unity. Jon Bon Jovi, Christina Aguilera, Mary J. Blige, Bruce Springsteen, Steven Tyler, and a heap of famous musicians performed their hit songs for a live television audience of millions. It was the first time that celebrities came together in such a way since Hurricane Katrina, the earthquake in Haiti, and the September 11th terrorist attacks of 2001. Songs as famous and seminal as Bon Jovi’s “Livin’ On A Prayer” were interspersed with more modern and hopeful ballads, such as Christina Aguilera’s “Beautiful”.

Mary J. Blige also took to the stage with her song about spirit and optimism, from The Help’s positive soundtrack, “The Living Proof”. The hour long donations came to an end with Springsteen and the E Street Band’s influential and apt song, “Land of Hope and Dreams”.

A conglomerate of NBC Universal networks, including USA, CNBC, MSNBC, E! Entertainment, The Weather Channel and Bravo, took part in the airing of the telethon, but not all of the US networks were so keen to join in the hopeful celebrations. According to Fox News, “In the wake of the Sept. 11 terrorist attacks, the networks organized a benefit together behind the scenes and it was televised on more than 30 networks simultaneously, including all the big broadcasters. After Hurricane Katrina, NBC televised its own benefit before the other broadcasters, one that became best known for Kanye West’s off-script declaration that “George Bush doesn’t care about black people.” The other broadcasters cooperated on their own telethon a week later, and NBC televised that one, too.”

However, in the spirit of giving, several of the networks which did not wish to partake in the airing, sponsored money at their own discretion. ABC’s parent, Walt Disney Co., donated $2 million, while Viacom Inc., the parent of MTV, also pledged massive donations to the American Red Cross.

We’re extremely harsh on celebrities over here at Hollywood Hiccups, especially the ones who fall off the bandwagon too often, but fortunately, once a national disaster as important and generation defining as Hurricane Sandy strikes, these celebrities seem to forget their own misfortunes, scandals, and egos at the door of entertainment fiction and fact.